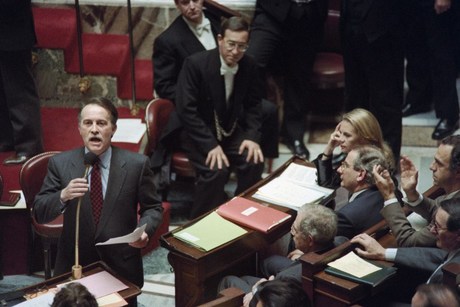 French lawmakers on Wednesday adopted two bills to prevent the spread of false information during election campaigns following allegations of Russian meddling in the 2017 presidential vote.

The "fake news" bills enable a candidate or political party to seek a court injunction preventing the publication of "false information" during the three months leading up to a national election.

They also give France's broadcast authority the power to take any network that is "controlled by, or under the influence of a foreign power" off the air if it "deliberately spreads false information that could alter the integrity of the election."

The measure is seen as aimed at Russia's state-backed RT network which began broadcasting in French late last year.

Macron has had Russian media in his sights since his 2017 campaign when a state-backed Russian site ran allegations that he was gay and had a secret bank account in the Bahamas.

France's opposition has criticized the bills as an attempt to create a "thought police", noting that a law dating to 1881 already protects politicians and other citizens against defamation.

Ahead of the late-night vote, Culture Minister Francoise Nyssen defended the draft laws saying they "in no way" violated the right to free speech.

The main target of the legislation is stories spread by fake-news bots that are "manifestly false and shared in a deliberate, mass and artificial way," she said.

The bill also requires that Facebook, Twitter and other social media platforms reveal the names of companies behind sponsored content and establishes a press ethics council, headed by the former head of AFP news agency Emmanuel Hoog.

Opposition parties from both the left and right have warned of the difficulty for judges being forced to make hasty decisions about what is true and what is false and of the courts being used for political point scoring.

Previous versions of the bills were adopted by the National Assembly in July, with the backing of Macron's Republic on the Move party, but they were rejected by the opposition-controlled Senate.

The latest drafts will now go back to the Senate for approval.

This should leave AFP's fake news dominating the scene.