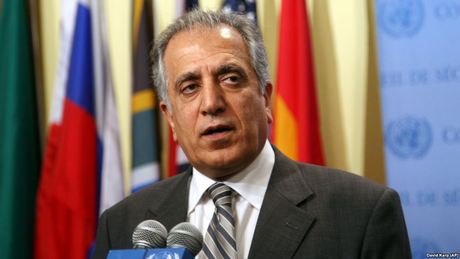 A Taliban delegation has met with US envoy Zalmay Khalilzad in Qatar to discuss ending the Afghan conflict, the militant group said Saturday, in the first official confirmation of talks between the two sides.

The meeting with Khalilzad and other American officials took place in Doha on Friday, Taliban spokesman Zabihullah Mujahid said in a statement sent to journalists.

The Taliban had reportedly met with US officials in July after an unprecedented ceasefire in June which fuelled hopes that negotiations could bring an end to fighting after 17 years. The meeting was not confirmed on the record by either side.

But a wave of attacks by the Taliban and the Islamic State group in recent months has poured cold water on the nascent optimism for peace.

A spokesman for the US embassy in Kabul declined to comment on the Taliban statement.

During the latest meeting, the Taliban told Khalilzad that the presence of foreign forces in Afghanistan was a "big obstacle" to peace, Mujahid said.

Both sides "agreed to continue such meetings".