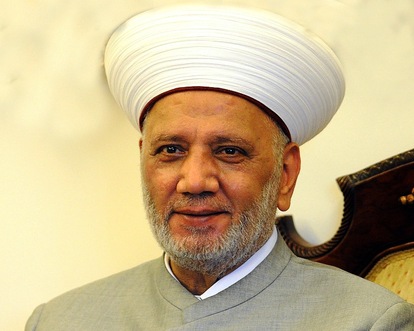 Grand Mufti of the Republic Sheikh Abdul Latif Deryan expressed solidarity with Saudi Arabia on Monday, condemning what he described as “political extortion” targeting it over the disappearance of Saudi journalist Jamal Khashoggi, the National News Agency reported on Monday.

Deryan expressed his resentment saying SA is being subject for “malicious goals intending to undermine its wise and rational policy led by the Custodian of the Two Holy Mosques King Salman Bin Abdul Aziz.”

He said the “campaigns of political extortion provoke the sentiments of more than a billion Muslim believers,” noting SA’s role in “spreading the culture of moderation, fighting extremism and cooperating with the countries of the world in fighting terrorism.”

Saudi Arabia has been witnessing an international backlash over the disappearance of Saudi journalist Jamal Khashoggi.

Khashoggi has been missing since entering the country's consulate in Istanbul on October 2.

Mind your own business ya grand mufti, you aren't a politician . People like You , Rahi and Qabalan are the problem.

Inta shatir bil copy paste. I may have a job for you, unless copy pasting is already your job?

I'm sure Trump, EU and others have taken notice of your statement. Keep it up!

What a sick statement from a so called religious person. Defending murderers. How noble.

Keep the religious people in power is what his concern is and he probably does not give two hoots what happens because of this.

Wow pure Genius ya Hassan, its like saying Most Lebanese hate Iran....yes we do so what Iran hates the rest of the world. At least we are free enough to say Daryan stay out of politics, can you say the same about your Gods?