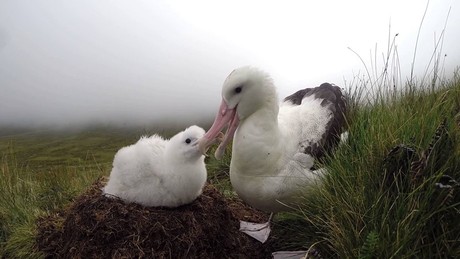 Mice brought to a remote South Atlantic island by sailors in the 19th century are threatening seabirds including the critically endangered Tristan albatross, a British charity said on Monday.

The Royal Society for the Protection of Birds said the rodents have proliferated on uninhabited Gough Island, part of a British overseas territory, and are killing two million birds every year.

"We knew there were large numbers of chicks and eggs being beaten each year but the actual number being taken by the mice is just staggering," Alex Bond, a researcher from the Natural History Museum in London, said in a statement released by the RSPB.

The predatory mice have evolved to become "two or three times larger" than the average house mouse and they attack in groups, eating away at the flesh of chicks which can suffer for days before the open wounds lead to their deaths, the RSPB said.

Other threatened species endangered by the mice include the Gough bunting and Atlantic petrel, the RSPB said.

Gough Island is part of the same territory as Tristan da Cunha and Saint Helena, the island where Napoleon was exiled and died in 1821.

The RSPB and Tristan da Cunha government are teaming up with international partners to eradicate mice from Gough Island in 2020, using two helicopters laden with poisonous pellets.

"Restoring the island to a more natural state will prevent the deaths of millions of seabirds," said John Kelly, RSPB manager for the Gough Island mouse eradication program.

The RSPB said the operation would be "logistically complex" because staff and equipment would have to be shipped to the island, located 1,550 miles (2,800 kilometers from South Africa.

The project is inspired by a successful eradication program on the British overseas territory of South Georgia, where rats were introduced by sealing and whaling ships in the 19th century.