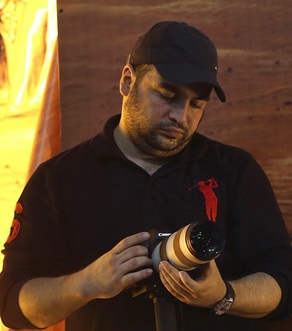 The son of Hizbullah’s leader designated by the U.S. State Department this week as a "global terrorist" is a poet and music lover who is said to move around without security and whose role within the group is shrouded in secrecy.

Jawad Nasrallah, the 37-year-old father of four, is the second eldest son of Sayyed Hassan Nasrallah who has been at the helm of the Iran-backed group since 1992.

In its designation on Tuesday, the State Department described him as "the rising star of Hizbullah," saying he has recruited people to carry out attacks against Israel in the West Bank, and in January 2016 tried to activate a suicide bombing and shooting cell based there.

The sanctions freeze any assets that those designated may have under U.S. jurisdiction and prohibit Americans from doing business with them.

The action followed the Trump administration's decision this month to re-impose oil and banking sanctions on Iran over its financing of militant groups like Hizbullah, its military engagement in Syria and its nuclear program.

In May, the U.S. and some of its Arab allies, including Saudi Arabia, the United Arab Emirates and Bahrain, imposed sanctions on 10 top Hizbullah officials including its leader Nasrallah, his deputy Naim Qassem and top officials Hashem Safieddine, Ibrahim Amin al-Sayyed, Hussein Khalil and Mohammed Yazbek.

People who know Jawad Nasrallah, however, disputed the State Department's description of his role within Hizbullah, with one resident of Beirut's southern suburbs, a Hizbullah stronghold, saying Nasrallah is not even a senior official within the group.

The man with close links to the group, who met the young Nasrallah on several occasions, described him as a modest man, adding it is almost impossible to believe that he is the son of the group's leader.

"He moves around without security and visits shops to buy stuff or to eat," the man said. "People respect him because he is a humble person and the son of Sayyed Nasrallah," he said, speaking on condition of anonymity because he was speaking about matters related to the group's security. He said Jawad is religiously moderate, unlike some other members of the group, and likes to listen to music.

"He is not a big official with the party. I never heard that he has a security or military post," the man said.

Another person familiar with the group also cast doubt on the "rising star" narrative or that he was a high-ranking member of the group.

Hizbullah declined a request by The Associated Press to comment on the State Department action. The group generally dismisses sanctions imposed on Hizbullah members as ineffective and part of psychological propaganda against the group. The Israeli Foreign Ministry also declined comment, while a Palestinian senior security official said Hizbullah stopped its activity in the West Bank and Gaza after the second intifada, or uprising, which ended in 2005.

Although his rank and role within the group have remained ambiguous, the round-faced Nasrallah is not the reclusive type, as senior Hizbullah commanders tend to be.

He has appeared publicly on numerous occasions, including at book signing events in 2007, when he published a collection of poems called "Resistance Letters." The book focuses on the role of poetry in resistance with poems that glorify those who died fighting Israel, including his elder brother, Hadi, who died while fighting Israel in south Lebanon in 1997.

In one poem called "Shukran," or "Thank you," he writes: "From the heart, thank you to the most beautiful father, thank you for being my inspiration, my father and my commander."

In an interview with a local TV station in that same year, Jawad refused to give details about his role within the group, only saying that he dedicated his life to the resistance. He said he likes music and movies, including comedy films, history and documentary movies.

The Trump administration has ramped up pressure on Iran and Hizbullah since withdrawing from the Iran nuclear deal last year. On Tuesday, the Department of Treasury also announced it was imposing sanctions on four Hizbullah operatives who were said to have provided financial, material and technological support to Hizbullah in Iraq.

naturally, he is a poet, a humanitarian, a peace activist and a notorious terrorist.

He is a living God to most Shiites so his name is a red line...unless its in reference to Red Label or other natural juices he enjoys. The editor forgot to mention his main source of income is a 10 hour job that has him working on numerous development of biogenetic engineering technology in West Da7ieh and not the Kizballah mill of cocaine or anything else thats illicit.

Biogenetics?? So he is a Genius too!

Jawad Hassan Nasrallah: Militant or Poet? He's neither he is

This is a perfect definition of moderation. ;)

No this is a perfect definition of moderation

Jawad Iblisovich Nasrallah is nothing more than a terrorist. May he rot in hell with his brother Hadi.

One thing Javad's never gonna be is a "project for martyrdom". Unlike all the thousands of men and boys many from the same family that his dad keeps sending overseas to their death for the sake of the Wali Al-Faqih.

Everything Hezbollah does is dictated by the Wali Al-Faqih, he pays for their absolute blind loyalty.