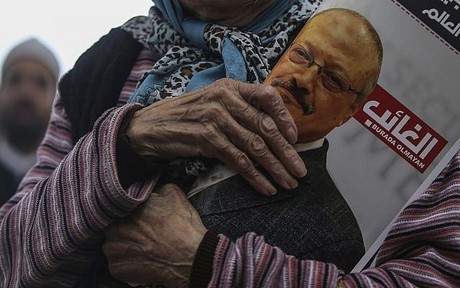 Denmark on Thursday suspended arms sales to Saudi Arabia over the murder of journalist Jamal Khashoggi, the second country to do so after Germany.

"The foreign ministry is suspending all sales of weapons and military equipment to Saudi Arabia," Foreign Minister Anders Samuelsen said.

"I hope that the Danish decision can create additional momentum," he added.

A foreign ministry spokesman said Copenhagen was not considering other sanctions for the moment.

On Monday, Germany decided to bar 18 Saudis from entering its territory and Europe's Schengen passport-free zone over their alleged links to the murder.

In October, Berlin called for EU countries to follow its lead and suspend arms sales to Saudi Araiba for the time being, prompting a dismissive response from French President Emmanuel Macron.

Khashoggi, a US resident who wrote for The Washington Post and had been critical of Prince Mohammed, was lured to the Saudi consulate in Istanbul on October 2, killed and reportedly dismembered.

After lengthy denials, Saudi authorities admitted responsibility and said 21 people had been taken into custody. However, a CIA analysis leaked to the US media went further, reportedly pointing the finger at the crown prince.

Saudi Foreign Minister Adel al-Jubeir on Wednesday said criticism of Crown Prince Mohammed bin Salman is a "red line", and that calls for him to be held accountable for the grisly killing would not be tolerated.