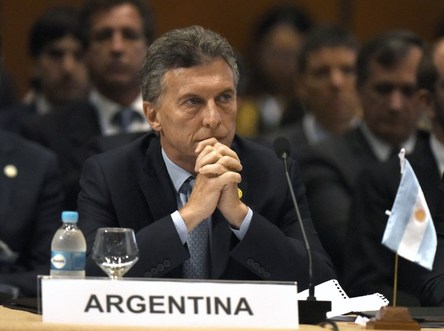 President Mauricio Macri said Monday the Argentine parliament will this month put the finishing touches to a draft law to fight football-related violence after the incidents that led to the postponement of the second leg of the Copa Libertadores final.

The Boca Juniors bus was attacked by fans of their Buenos Aires rivals River Plate hours before kick-off on November 24. The match was then postponed a second time and the fixture has now been moved to Madrid.

"After the scandalous events ten days ago we are going to introduce a new law to try and put definitive limits on violence and ultras groups in football," Macri said in a press conference.

"It can't happen again that international football bodies tell us that we can't play in our own country," he added.

Boca Juniors and River Plate will meet on December 9 at Real Madrid's Santiago Bernabeu stadium with the score tied at 2-2 from the first leg.

Parts of the stadium will be kept empty in an attempt to separate both sets of fans.

The violence around the final have deeply damaged the reputation of Argentine football, and have thrown a shadow over the country's joint bid with Uruguay and Paraguay to host the 2030 FIFA World Cup.