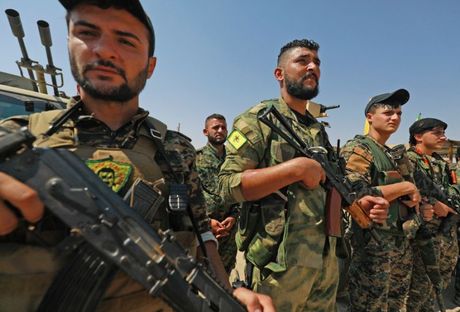 Any unilateral military action in northern Syria would be "unacceptable", the Pentagon said Wednesday after Turkey announced it would launch an operation against a US-backed Kurdish militia.

"We will start an operation to free the east of the Euphrates from the separatist terrorist organisation in the next few days," Erdogan said during a speech in Ankara, referring to territory held by the Kurdish People's Protection Units (YPG).

American forces have worked closely with the YPG under the Kurdish-led Syrian Democratic Forces (SDF) alliance, which has played a key role in the war against the Islamic State (IS) extremist group

The Pentagon has repeatedly warned that any fighting between the Turks and the SDF is a dangerous distraction from the core US mission in Syria of fighting IS.

Pentagon spokesman Commander Sean Robertson said any unilateral military action in northeast Syria would be a "grave concern", as it could potentially jeopardise US troops working with the SDF in the region.

"We would find any such actions unacceptable," he said in a statement.

Turkey says the YPG is a "terrorist offshoot" of the outlawed Kurdistan Workers' Party (PKK), which has waged an insurgency against the Turkish state since 1984.

PKK is blacklisted as a terror group by Ankara and its Western allies.

"The target is never American soldiers but terrorist organisation members active in the region," Erdogan told the audience at a defence industry summit.

American forces are with the SDF east of the Euphrates as well as in the flashpoint city of Manbij, which is west of the river.

"We should not and cannot allow (IS) to breathe at this critical point or we will jeopardise the significant gains we have made alongside our coalition partners and risk allowing (IS) to resurge," Robertson said.

The YPG also said a Turkish offensive would be to the benefit of IS.

"The (Turkish) threats coincide with the advance of our forces against the terrorists, this time with the entrance into the town of Hajin," YPG spokesman Nuri Mahmud said.

The SDF launched an offensive on September 10 to expel IS from the Hajin pocket, on the eastern bank of the Euphrates River close to the Iraqi border.

"Any attack on the north of Syria will have a direct impact on the battle of Hajin. The forces who are fighting (there) will return to defend their areas and their families," Mahmud said.

Washington's relationship with the YPG, seen as a key ally, is one of the main sources of tensions between the United States and NATO member Turkey.

Ankara has repeatedly lambasted Washington for providing military support to the Kurdish militia.

Erdogan has previously threatened to attack areas held by the YPG. In a bid to avoid any clash, the NATO allies agreed a "roadmap" for Manbij in June.

Erdogan's comments came a day after the Pentagon announced the setting up of US observation posts on the northeast Syria border region intended to prevent altercations between the Turkish army and the YPG despite calls from Ankara not to go ahead with the move.

Elizabeth Teoman, analyst at the Institute for the Study of War (ISW), said Erdogan may be threatening the attacks "to compel a change in US policy regarding the US observation posts along the Syrian-Turkish border".

She added that "Turkey may attempt to target YPG rear areas without a definitive US presence in the form of an observation posts."

Turkey has previously launched two operations in northern Syria. The first offensive began in August 2016 with Turkish forces supporting Syrian opposition fighters against IS and was completed by March 2017.

Then in January 2018, Turkish military forces backed Syrian rebels to clear the YPG from its northwestern enclave of Afrin.

In March, the operation was completed with the capture of Afrin city.

The Pentagon seems out of control but much weakened. The US does not need a defense department, has not needed one for thirty years. We must, however, recover the martial spirit, whose first characteristic is honesty.