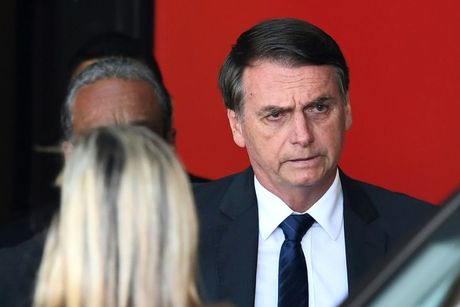 Brazil's new government under far-right President Jair Bolsonaro includes a star anti-corruption judge as justice minister and a free-market economy minister with broad powers, and sees a third of the slots going to ex-military men.

The foreign ministry is to come under a mid-level public servant who shares Bolsonaro's fervent anti-left views and desire to sidle closer to the United States.

And an anti-abortion evangelist pastor has been named to take charge of the human rights portfolio.

The vice presidency goes to a retired general, Hamilton Mourao, 65, known for right-wing views that mesh with his boss and a similar penchant for shooting from the hip. He has vowed he will not be a "brain-shrunken" second fiddle in the administration.

Sergio Moro won national fame and plaudits for being the head judge of a vast anti-corruption probe known as "Car Wash" that has thrown some titans of Brazilian business and politics into cells -- including former president Luiz Inacio Lula da Silva.

Now the 46-year-old will become justice minister, even though he doesn't see eye-to-eye with Bolsonaro on some key issues, such as making guns easier to own or designating poor rural land-grabbers as "terrorists."

Bolsonaro became a darling for investors because of the man he is making his economy minister: Paulo Guedes, a US-trained economist who is intent on sweeping free-market reforms that would upend Brazil's previous protectionism to slash debt.

But while Guedes, 69, will have broad powers, it remains to be seen if he can get privatizations past the conservative president, who has freely admitted he knows little about economics.

The powerful chief-of-staff's post has gone to an experienced lawmaker, Onyx Lorenzoni, 64, seen as the brains behind the campaign that brought Bolsonaro to power.

A military mentor to Bolsonaro in the 1970s, retired general Augusto Heleno, had been considered as defense minister but finally will take on the security portfolio responsible for intelligence.

The mid-ranking career diplomat Ernesto Araujo, 51, saw his loyalty to Bolsonaro and his nationalist views -- echoing those of US President Donald Trump -- rewarded with a nomination to head Brazil's foreign ministry.

He has come out strongly against leftist governments in Latin America, namely Cuba, Venezuela and Nicaragua, and criticized "cultural Marxism" he believes has influenced scientific thinking on climate change.

Damares Alves, the new minister for women, the family and human rights might be an evangelical pastor opposed to abortion and feminism, but she has also expressed hopes for a rapprochement with Brazil's gay community.

Her responsibilities will also include indigenous rights, which has left the justice portfolio to come under her ministry.