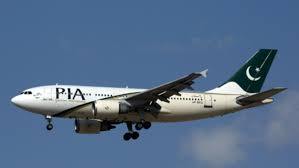 Pakistan International Airlines (PIA), which was considered a global leader in commercial aviation until the 1970s, has been plagued by myriad controversies in recent years and saddled by billions of dollars in debt.

He said at least six additional pilots had been fired recently on the same grounds.

The airline has cancelled the pilots' licenses, Tajwar added. He did not specify what the other PIA staff who were sacked did for the airline.

PIA was widely mocked in 2016 for sacrificing a goat next to a turboprop ATR plane to ward off bad luck, weeks after one of its planes crashed killing 47 people in one of Pakistan's worst air disasters.

Last year it had to apologize after forgetting two corpses due to be transferred to Pakistan from New York.

And in 2013 one of its pilots was jailed in Britain for being drunk before he was due to fly from Leeds to Islamabad with 156 people on board.

PIA employees have also been periodically investigated for drug-smuggling, especially after drugs were seized from a Dubai-bound flight in 2016.