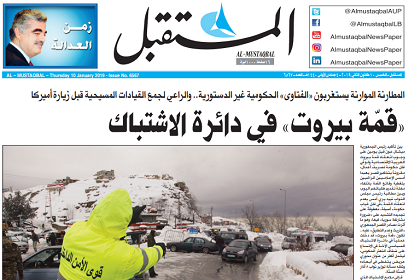 Another Lebanese newspaper has decided to stop printing and go fully online in the face of the deteriorating readership of print media in Lebanon and the world.

“Faced by the transformations that the press industry is witnessing in Lebanon and the world, and the continuous decline in sales and advertising revenues in the local marker, the administration of al-Mustaqbal Newspaper has decided to stop issuing the daily’s print edition as of February 1, 2019,” it said in a statement.

The daily “will become a fully digital newspaper,” the administration added.

“The mission of turning the daily into a digital platform and managing it has been tasked to the colleague Georges Bkassini,” al-Mustaqbal’s incumbent managing editor, the newspaper’s administration said.

It added: “Al-Mustaqbal Newspaper, which has accompanied the readers of its print edition throughout 20 years, promises them and promises the current and future readers of its digital edition that it will continue to seek offering them the best media service, with the spirit of the national and Arab message that it has carried since its establishment.”

The daily also pledged to “follow up on the profound transformations that the press industry is witnessing across the world.”

The press in Lebanon has been in crisis for several years, both as it struggles to adapt to the digital era and faces economic difficulties.

In September, al-Anwar newspaper, which was first issued in 1959, said its publisher was suspending its print version, citing "financial losses."

The publisher's eight other publications -- including popular cultural weekly al-Shabaka -- would also cease to be printed, it said.

In June, prestigious pan-Arab newspaper al-Hayat closed its Lebanon offices, where it was first founded in 1946 before later becoming Saudi owned.

Its printing presses in Beirut stopped the same month, leaving its international version only available online.

In late 2016, Lebanese newspaper as-Safir shuttered 42 years after it published its first edition, with the founder saying it had run out of funds.

Other newspapers have carried out mass layoffs or suspended salary payments.