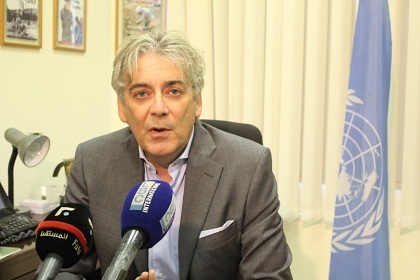 As Israel continues construction works on disputed points along the Blue Line, UNIFIL spokesperson Andrea Tenenti assured that efforts are being exerted to avoid any “misunderstanding and find a mutual solutions for the issue,” the National News Agency reported on Friday.

“The UNIFIL command is in full contact with the parties to avoid misunderstanding and find a common solution to this issue. Our soldiers are on the ground to monitor the situation and maintain calm along the Blue Line,” said Tenenti.

Tenenti’s remarks came as Israel continued construction works it kicked off on Thursday along the Blue Line opposite the outskirts of Adaisseh village in Marjayoun.

On Friday, Israel poured concrete as part of blocking some infrastructure along the technical fence in the outskirts of Adaisseh. It momentarily halted construction works it began a day earlier to build a concrete separation wall.

The troops also launched a phantom drone over al-Mahafer neighborhood.