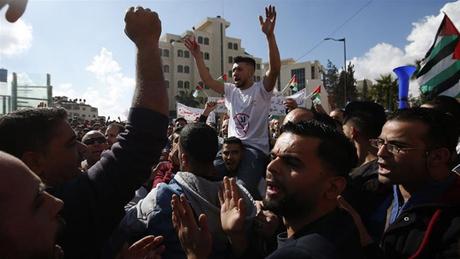 Thousands of Palestinians in the occupied West Bank joined a strike on Tuesday against their government's proposed new social security law, fearing the fund will be mismanaged.

The strike, which saw much of Ramallah, Hebron and other Palestinian cities closed, comes hours before president Mahmud Abbas is due to address the United Nations.

A few thousand people protested outside the Social Security Corporation in Ramallah, where Abbas's government is based.

Under the proposed system both private employers and their employees would pay monthly into a government-managed fund, with employees receiving a pension when they retire.

The government says it will provide new security for employees, arguing similar systems exist in countries across the globe.

Protesters say they do not trust the Palestinian government to manage the fund and point out there are no guarantees.

They also say Israel's occupation of the West Bank means that the long-term existence of the Palestinian Authority government is far from secure.

Israeli soldiers have carried out repeated raids inside Ramallah in recent weeks, including near Abbas's headquarters, following two deadly shootings.

Amer Farah, who works at Bank of Palestine in Ramallah, said that in functioning states the social security laws were important to protect citizens' futures.

"But we are still under occupation, and there is no contact between parts of the country," he told AFP, alluding to the decade-long split between the West Bank and Gaza, where Abbas's rivals Hamas are in control.

"The country is not stable, neither economically nor politically. How will they implement the law?"

Abbas is due to speak at the United Nations General Assembly later Tuesday, where he is expected to again call on world powers to recognise Palestine as a state.