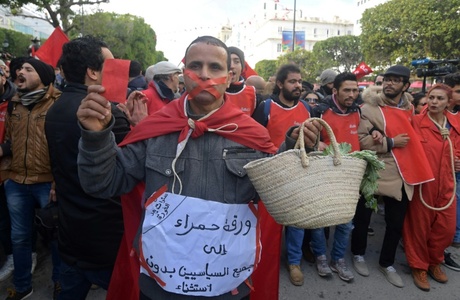 A public sector strike brought Tunisia to a standstill Thursday as workers heeded calls from a powerful trade union to stay home over demands for wage hikes and economic reforms.

Across the country, schools were closed, public offices shuttered and transport paralyzed after calls for a 24-hour strike by the Tunisian General Labor Union (UGTT).

Only one flight took off from the international airport in Tunis, the transport ministry told AFP.

The UGTT had addressed its call to the country's 677,000 civil servants and 350,000 employees of state-owned companies, who make up nearly a quarter of the Tunisian workforce.

Protesters took to the streets of the capital chanting "the Tunisian people do not accept humiliation," criticizing Prime Minister Youssef Chahed's for bowing to reforms dictated by the International Monetary Fund (IMF).

Some held portraits of IMF chief Christine Lagarde, with a bright red X painted over her face.

Tunisia is seen as having had a relatively smooth democratic transition since the January 14, 2011 toppling of president Zine El Abidine Ben Ali after 23 years in power.

But price hikes fueled by the fall of the Tunisian dinar, combined with tax increases and stubborn unemployment, have spurred social discontent.

In 2016, the IMF granted Tunisia a 2.4-billion-euro loan over the span of four years in exchange for a promise to carry out economic reforms and to control civil service salaries to avoid pushing up the public deficit.

"The UGTT will oppose the failure of the liberal choices of these leaders," UGTT head Noureddine Taboubi told the crowd, speaking from a balcony at the union's headquarters.

In Sfax, the second largest city in the country, thousands of demonstrators took to the streets.

The union has called for wage hikes for public sector employees to counter the decline in purchasing power due to inflation, which stands at 7.5 percent.

In a televised speech Wednesday, Prime Minister Chahed said public finances meant he could not accept the union's demands, adding that dialogue would continue after the strike.

"It is the wage increases conceded after the revolution in the absence of real growth that have led to inflation, debt and declining purchasing power," he argued.

Thursday's strike was the first to bring together employees from both the public sector and state-owned companies.