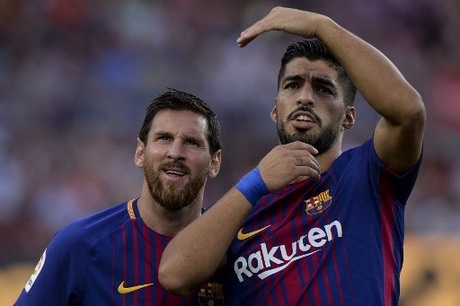 With half of the season gone, Barcelona own a five-point lead at the top of La Liga, boast two strikers with as many goals as any other team and look on course for their fourth league title in five years.

But how good are they? Six league wins on the bounce has blurred the memory of unrest in September, when problems at the Camp Nou and Santiago Bernabeu appeared almost on an even keel.

Coach Ernesto Valverde steered his team back into form while Madrid's slump plunged deeper, with a change of coach sparking a brief revival, only for old weaknesses to float back to the surface.

Real's troubles have accentuated Barcelona's superiority, not only in terms of points, where there is a 10-point difference between the club in the table, but on the pitch too.

Barca's 5-1 hammering of Real in October came as a knockout blow for Julen Lopetegui, made even sweeter in Catalonia that they were the ones to deliver it.

But more generally, every jolt dealt to Real -- by Sevilla, Alaves, Levante, Eibar, Real Sociedad and Villarreal in the league alone -- has made Barca's progress appear all the more smooth.

"It is to our advantage but I don't think too much about the other teams teams," Valverde said recently. "I never discard anyone, not Madrid nor anyone else."

Barca's 3-0 win last weekend against Eibar was one of their best of the season and there is a sense now of a team hitting their stride, when rivals were already struggling to keep pace.

Philippe Coutinho's absence from Valverde's starting line-up had become a concern but against Eibar he returned and was superb.

Luis Suarez, who scored twice, is back to his best. Lionel Messi was quiet, but scored his 400th La Liga goal. Perhaps most impressive of all, Barca hardly needed him.

Messi and Suarez now have 31 league goals between them while Barcelona's goal difference is twice as good as that of second-placed Atletico Madrid. The defense, previously creaking, has tightened.

"There was a time when we had to focus on our defending and see where the problem was," Valverde said. "We have to attack well but also give little away."

Barcelona host Leganes on Sunday and Valverde will know the season is judged in June not January.

Twelve months ago, his team were eight points and three wins better off. Their defense had been sturdier too, by 11 goals.

Despite progress in La Liga and the Copa del Rey, success in the Champions League remains the priority, even if Valverde refuses to admit it. His future, and the activation of a one-year contract extension in the summer, is likely to depend on it.

Atletico and Sevilla may not prove consistent enough in the league but in Europe, in a knock-out phase, Barca's mettle will be tested. Valverde's priorities will also come into sharper focus as he attempts to juggle three competitions.

"There are those who think that if we lose in the Copa del Rey we will win the Champions League," he said before Thursday's win over Levante. "But I don't."

Their lead over Atletico, who face bottom club Huesca on Saturday, is unlikely to grow this weekend but at least one of Real or Sevilla will drop points, as they play each other at the Bernabeu.

Santiago Solari conceded it was a "weak performance" that brought defeat by Leganes in the Copa del Rey on Wednesday, even if Real still progressed on aggregate.

Victory over Sevilla would deliver a boost to Real's chances of finishing in the top four but their title hopes are now miniscule. In Spain again, Barcelona are in charge.