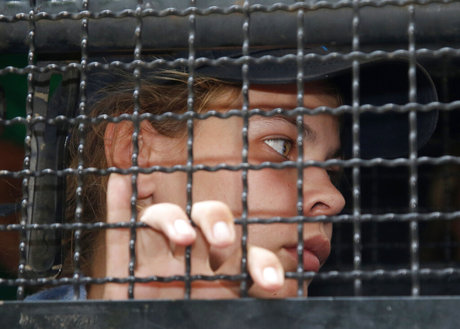 A Belarusian model who claimed she had proof of Russian collusion with the Trump election campaign was in custody Friday after police "dragged" her from a transit zone in Moscow's airport, her lawyer told AFP.

Anastasia Vashukevich, known as Nastya Rybka, was in jail in southern Moscow after being detained with several others at the airport.

They flew in after being deported from Thailand where they had spent a year in prison for participating in a "sex training course."

A Russian lawyer representing Vashukevich branded the arrest an "international scandal," saying his client had "committed no crimes" and was planning to travel on to Belarus.

Instead she was "moved from the transit zone onto the Russian territory by unidentified law enforcement employees," said Dmitry Zatsarinsky.

He said employees in civilian clothes "dragged her out of the transit zone" and added that he was planning to lodge an official complaint.

Zatsarinsky posted a video on his Instagram that shows five or six men trying to force a young woman resembling Vashukevich into a wheelchair as she tries to break free.

They then abandon their efforts and simply carry her through what appear to be one-way double doors typically used in airports.

Vashukevich was convicted in Thailand earlier this week after nearly a year in jail following her arrest in a seaside resort of Pattaya.

She pleaded guilty to multiple charges including soliciting and illegal assembly.

Vashukevich was a part of a group participating in a seminar led by Russian self-styled seduction guru Alex Kirillov. The court convicted her and seven co-defendants.

She had traveled to Thailand after sparking a political scandal when she posted a video allegedly showing tycoon Oleg Deripaska and an influential Russian deputy prime minister relaxing on a yacht.

While in Thai custody, she claimed she had information about alleged Russian meddling in the 2016 U.S. elections and pleaded for U.S. help, fearing prosecution in Russia.

Zatsarinsky said that some people in the group had been deported to Belarus via Ukraine, rather than Russia, and faced no problems at the airport in Kiev.

Russian police late Thursday confirmed Russian and Belarusian citizens were detained in Sheremetyevo airport on arrival from Thailand as part of an ongoing probe into "coercing into prostitution."