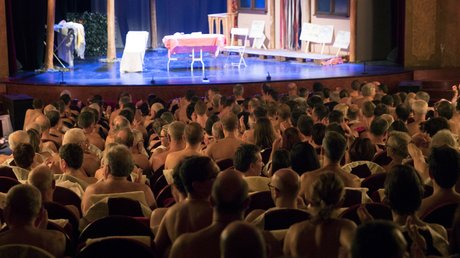 It might seem like a cruel joke on one of the coldest nights of the year, but French naturists are in the pink over the success of a Paris play the audience had to strip to see.

Undeterred by the chilling name of the venue, the Palace of Ice, nudists shed their winter woolies to watch the farce sending up those who object to their lifestyle.

"There is no better way of laughing than to laugh in the nude," said Cedric Amato, the head of a Paris nudist group, who braved a forecast of snow to attend.

The one-off show, about a brother and sister who find themselves on opposing sides of prickly social issues, was the first all-nude show in a major venue in the French capital.

The producers insisted that the audience must strip off to see the play, and that everyone must bring their own towel -- for hygiene reasons.

VIPs, however, were provided with their own microfiber seat covering.

"Nu et approuve", which translates as nude and approved, is a play on words of a formula commonly used in France for signing official documents.

The squabbling siblings "have to drop their masks and bare all to find a more relaxed common ground."

Nudists gave the show the thumbs up. "I really enjoyed it," one middle-aged woman told AFP, while Amato said it was important because "it is a way for us also get to talk about our lifestyle and our needs.

"We need to break the social codes to be ourselves in a place like this and have a good time," he said.

Naturists have been pushing to make their lifestyle more mainstream in Paris, with stand-up comedy nights, naked museum visits and a dedicated nudist zone in the city's biggest park.

However, the French capital's first nudist restaurant, O'Naturel, will close next month because it could not put enough bums on seats.