Jilted France, Angry Italy: Divorce at the Heart of EU 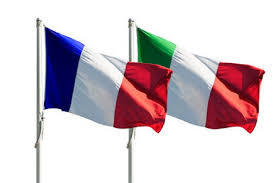 With diplomatic ties between France and Italy increasingly tense, some observers have reached for marital metaphors to describe the breakdown in relations between two countries at the heart of the European Union.

The silver-screen tale of passion and deceit recounts the struggles of a local aristocrat and his wife to divorce when it was illegal to do so in Italy -- like modern-day France and Italy, which have drifted apart but are bound together inside the EU.

Moisi said he was stunned this month when Italy's populist leaders publicly backed "yellow vest" demonstrators who have taken to the streets in France since November to denounce French President Emmanuel Macron.

"An Italian government at the core of the European Union encouraging opposition forces to this extent? I don't think there's a precedent," he told AFP in an interview.

The seeds of the crisis were planted back in March, after elections in Italy that left Macron feeling jilted.

The centrist was hoping for a compatible government to emerge in Rome to join him with his grand plans for pro-EU reform.

Instead, it was euroskeptic populists -- the far-right League and anti-elite Five Star Movement -- who emerged victorious.

It has many analysts wondering about the consequences for the EU, given that French-Italian ties have been a generally stable axis in a bloc that is grappling with Brexit and other tensions between eastern and western members.

"The fact that we can't work with Italy on the European project is a real problem," Sebastien Maillard, director of the Jacques Delors Institute think-tank in Brussels, told AFP.

"Already with other partners it isn't easy, including with Germany, but Italy was always a close ally, in line with French positions," he added.

Last week, France summoned the Italian ambassador to lodge a complaint after Di Maio accused France of continuing to colonize Africa and said Paris was indirectly responsible for Africans migrating to Europe.

Salvini left no doubt about his feelings a few days later, calling Macron "a terrible president."

"I will not respond. That's what they want," Macron said on Sunday in Cairo. "The Italian people are our friends and deserve leaders who are worthy of their history."

But it would be wrong to see France or Macron as simply the victims of Italian antagonism, analysts say.

French-Italian ties, like marriages, are subject to their own sensitive internal dynamics.

"This crisis has deep roots. There's a form of competition and a superiority complex among the French which has run into an inferiority complex in the Italians," Moisi told AFP. "There's something very emotional in Franco-Italian relations."

In one of his first bursts of diplomatic activity in 2017, Macron waded into finding a solution for war-wracked Libya, organizing a major peace conference in Paris.

He omitted to fully consult Italy -- Libya's former colonial power -- which jealously guards its historic influence in the country and its economic interests.

For electoral reasons, Macron has also talked up the differences between what he calls his "progressive" camp and far-right nationalists like Salvini ahead of European Parliament elections in May.

When Salvini turned away a rescue boat with migrants on board last June, Macron blasted him for his "cynicism and irresponsibility."

He went on to liken populism to "leprosy" -- a remark that still rankles in Rome.

A French diplomat, speaking on condition of anonymity, said the issue of immigration "continues to complicate things", while the Italian government has also attacked EU budget rules that limit public spending.

But Rome's positions in other key areas of European policy-making, such as a new budget for the eurozone, a proposed tax on digital companies and new defense initiatives, are still relatively aligned with France, the diplomat said.

"It's not a Franco-Italian crisis, even if France is an easy and convenient target for them," said the diplomat on condition of anonymity. "The main issue is the relationship Italy has with Europe."

Moisi says that after the European elections in May there is a "greater chance of compromise" that might limit the current tensions.

That sounds better than "Divorzio all'italiana" -- which ends with murder.