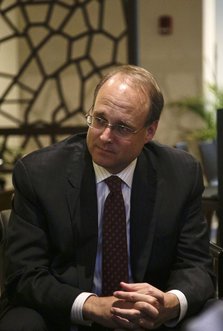 The U.S. Ambassador to Lebanon Elizabeth Richard, accompanied Billingslea to his meeting with Aoun at the Presidential Palace. She will also accompany him on his tour of other Lebanese officials, NNA said.

Well informed sources told al-Joumhouria that the American envoy’s visit is “exceptional” and is intended to develop a work program entitled “Lebanese-US Partnership in the Fight against Financing of Terrorism.”

The mission of the delegation is aimed at monitoring the implementation of sanctions against Iran and Hizbullah in particular, and the sanctioned Iranian institutions and terrorist organizations, according to the source.

They pointed out that “Lebanon is a key partner in this mission and is committed to implementing all resolutions and laws that sponsor the movement of illegal funds in the world, especially through intermediary American banks.”

“Discussion will focus on the manner in which these decisions are implemented, especially those concerning the banking sector in Lebanon on the basis of the “close partnership established by the US government with the Central Bank and Lebanese financial institutions," they added.

We are pariahs of the world whenever we try to open a Bank account, or send money somewhere because of Ebola! Except in Iran I suppose! Tfehhhhhhh!

Additional pressure on the banking system for Lebanon to abide by US anti terror will. Insatiably as part of the Ayatolla's plan this will all add to sink Israel and create an Shia Islamic empire worthy of books and mention akin to calling it Valhalla lol.