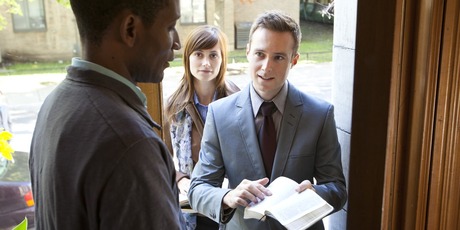 A Jehovah's Witness arrested in Russia two years ago for extremism is to hear the verdict next week, supporters said Wednesday, as he could spend more than six years in jail.

"The verdict will be announced in court on February 6," the group's Russian wing said in a statement on its website.

The 46-year-old was in court in Oryol on Wednesday for closing statements in his trial.

Prosecutors have asked for six and a half years in jail, less than the maximum 10-year penalty for organizing extremist activities.

"He wasn't doing anything illegal and of course he wasn't planning to," his Russian wife Irina Christensen said outside the court.

Marina Gough, another supporter outside the court, described Christensen, who moved to southern Russia as an adult, as a "good person" who would go out of his way to help his neighbors.

Christensen's trial will be the first completed against a Jehovah's Witness in Russia since the end of the Soviet Union, according to the group.

In 2017 Russian authorities amended an existing anti-extremism law to mention the denomination specifically, ordering their dissolution in Russia.

Since then there has been an intensifying crackdown on believers, with 27 people in pre-trial detention or on trial and dozens of properties confiscated.

In a report last year, Human Rights Watch accused the Russian authorities of a "sweeping campaign" of harassment and persecution against the movement.

In 2010, the European Court of Human Rights ruled that the dissolution six years earlier of the movement's Moscow branch had violated the right to freedom of religion and association.

The Jehovah's Witnesses say they number more than 170,000 in Russia, a country of 144 million people where most are Orthodox Christians. Thousands more of their members have fled to other countries.

Members of the group -- a Christian evangelical movement that began in the United States in the 19th century -- consider modern churches to have deviated from the Bible's true teachings.

The powerful Russian Orthodox Church has spoken out against the group, with one church official branding it a "destructive sect."