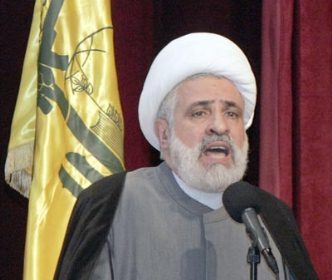 Hizbullah deputy chief Sheikh Naim Qassem announced Friday that his party will not bow to the growing U.S. pressure.

“Hizbullah will not bow to pressures or sanctions. These sanctions will not affect the party's stances but will rather make them firmer,” Qassem said.

“In the end, we will overcome this course and we will reach victory, God willing, the same as we triumphed on several fronts,” Hizbullah number two added.

“We will not abandon our land nor accept that it remain occupied by Israel. We have the right to defend this land and we won't accept to be followers of America no matter what the temptations and pressures might be, because we have the right to be independent in our country,” Qassem said.

Turning to the issue of the new government, which was formed on Thursday, the Hizbullah leader said it was “normal” for it to be a “national unity government.”

“We defended this choice, because Lebanon's structure can only bear a national unity government,” he added.

Qassem also called on the government to address the economic and social issues, to fight corruption, to grant contracts based on tendering and to implement developmental projects in all regions.

A senior U.S. official had warned Hizbullah on Thursday not to exploit its newly gained clout in the new government to channel funds from the health ministry.

Billingslea spoke to local journalists at the U.S. Embassy in Beirut at the end of a two-day visit during which he met with Lebanon's president, prime minister, central bank governor and other officials.

"If we see that Hizbullah exploits, and they will exploit whatever ministry they are given, to funnel money and other terrorist agendas, then we have significant problems with that," Billingslea was quoted as saying. He declined to elaborate what the U.S. Treasury would do in that case.

The new health minister, Jamil Jabaq, is not a member of Hizbullah but is believed to be close to the group's leader, Sayyed Hassan Nasrallah, and was his personal physician at one point.

The 30-seat government has seen an increase in the number of ministries affiliated with Hizbullah, which is under tightening sanctions from the U.S.

The group has been affected recently by the U.S. sanctions as well as those imposed on its main baker Iran.

"Hizbullah Won't Bow to U.S. Pressure" they already did when they named Dr Jamil Jabaq to the health minister.

This terrorist is already wearing his shroud on his head. He probably uses as toilet paper too.

Qassem has been a lot more audible recently than in the past. This could be to cover the fact that the bearded goat is not doing too well. Also it could be that Iran needs to have a back up mouth piece once the old goat goes to see his 72 virgins who I am hoping at least for his sake look nothing like him or his offspring.

yes... the towel head is ill it seems...skeletor... could you accelerate the process please!

He and I agreed on the date and place. He will be with me in 2019 for sure. I just have to make sure the sauna is boiling hot, the Jacuzzi is steamy, and the furnace is red hot.