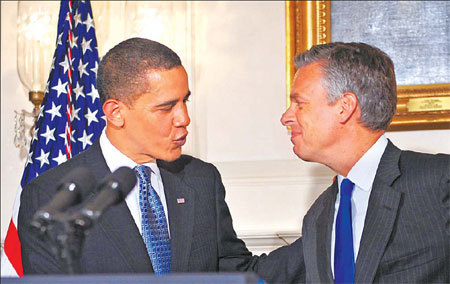 U.S. ambassador to China Jon Huntsman resigned Monday, amid reports that he may seek the Republican nomination in 2012 and try to deprive his boss, President Barack Obama, of a second term.

Huntsman, a smooth former Utah governor, wrote to Obama to announce he would resign effective from April 30, after the White House noted he had told several officials he planned to leave in the first part of this year.

"I have talked to several people in the building, I have not heard anybody say that they know what the future holds for Ambassador Huntsman," Gibbs said.

Obama's 2009 pick of Huntsman to serve in the crucial Beijing post was seen as a political masterstroke, potentially taking one possible rival out of the game in the upcoming presidential election.

But Huntsman stirred 2012 buzz with a Newsweek interview late last year in which he suggested he had one political run left in him, and after buying a new home in Washington.

Huntsman, the son of a chemical billionaire, could inject his own cash into an effort to explore his prospects in the crowded field of presumed Republican contenders for the presidential nomination.

He would bring solid foreign policy and economic credentials to the table, after two years steering perhaps the most important, and often troubled, U.S. diplomatic relationship.

But many commentators believe his service as a member of Obama's government will prove a huge liability in wooing the conservative voters who dominate the Republican Party nominating process.

And some of his more centrist positions on issues like climate change and immigration may also prove problematic in the Republican primary. Other commentators say his Mormon faith could irk evangelical Christian voters who comprise a key part of the Republican party base vote.

Obama made a tongue-in-cheek reference to Huntsman's prospects when he was asked about his envoy's political intentions during a White House press conference with Chinese President Hu Jintao earlier this month.

He said Huntsman had done an "outstanding job" as ambassador to China and shown enormous skill, dedication and talent.

"I'm sure he will be very successful in whatever endeavors he chooses in the future, and I'm sure that him having worked so well with me will be a great asset in any Republican primary," Obama added.

Huntsman learned Mandarin Chinese when he served on a Mormon mission in Taiwan.

He has been seen as a moderate voice in the Republican Party and was a popular governor -- he gained 70 percent of the vote in November 2008 for a second term as Utah's top official.

He and his wife Mary Kaye have seven children, including two daughters adopted from China and India.