Generation Guaido: A Threat to Chavez-Style Power in Venezuela 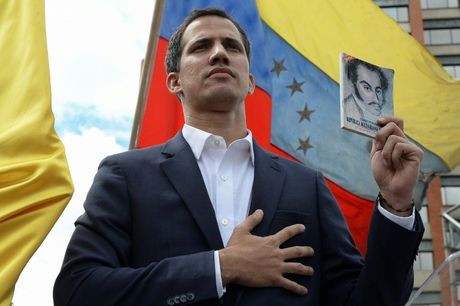 More than a decade ago, university students in Venezuela burst onto the political scene by rekindling opposition to then leader Hugo Chavez with street protests that led to the socialist firebrand's only election defeat.

Now, one of the more low-profile leaders of that drive, Juan Guaido, is heading an offensive that is seen as having a decent chance to remove from power Chavez's handpicked successor, the former bus driver Nicolas Maduro.

Guaido, the 35-year-old speaker of the National Assembly, declared himself interim president on January 23 during an opposition rally in Caracas, surprising many in Venezuela.

Since then Guaido has been recognized as interim president by more than 40 countries, led by the United States, and millions of Venezuelans have found in him hope for a way out of a grinding socio-economic crisis marked by shortages of food, medicine and even such basics as soap and toilet paper.

An industrial engineer by training, Guaido has reinvigorated Venezuela's fragmented opposition and shaken up the world of politics in the oil rich country.

Back in 2007, Guaido stirred the opposition with other student leaders by leading, successfully, demonstrations against a constitutional reform that would have let Chavez seek re-election indefinitely. His defeat came in a referendum.

Many of those student leaders joined established political parties and became well-known in the news media, such as former mayor David Smolansky, who is now in exile in Washington, or lawmakers Manuela Bolivar and Juan Andres Mejia.

Guaido also ran for a seat in congress, where in 2010 he became an alternate deputy and in 2015 won a full-fledged seat. But all along he kept a low profile.

"He did not like to draw attention to himself. He did not seek to give speeches or attract the news media," said Angel Zambrano, a colleague from the days of the student protests. "He was more involved in organizing things, at a technical level," Zambrano told AFP.

Guaido is now front-page news around the world, although prior to becoming speaker of the opposition-controlled national assembly last month only three percent of Venezuelans knew who he was, said Felix Seijas, citing a study by the polling firm Delphos, which he runs.

- Looking for an outsider -

In 2015, the opposition scored a landslide win in legislative elections, dealing the post-Chavez government its biggest election defeat ever. Chavez died of cancer in 2013.

But after the blocking of a referendum seeking to remove Maduro from power and anti-government street protests in 2017 that left 125 people dead, the opposition grew deeply divided amid disputes among parties and disagreement on what strategy to take against Maduro.

"People lost trust and became tired of traditional politics, and several years ago the idea emerged of trying to find an outsider," Seijas told.

In rallies held in recent weeks, the opposition has praised him as a pleasant surprise with no ties to mainstream parties.

Maduro has dismissed Guaido as "a kid who is playing politics". Still, he has said he is willing to meet with him.

Guaido and his generation are "the grandchildren of the dinosaurs of the fourth republic," or governments prior to Chavez, said the powerful pro-Chavez politician Diosdado Cabello. He derided Guaido and other young politicians like him as "lackeys of the empire", referring to the US.

Married and the father of a toddler, Guaido is all the rage for Venezuelans who have resisted joining 2.3 million people that the United Nations says have fled the country and its economic woes since 2015.

"He is the leader we were all waiting for. A new, young leader who is not tainted with old-style politics," said Carlos Morales, a 62-year-old demonstrator who says he used to support the Chavez camp.

But Guaido's rise also stems from agreements between old and new opposition parties, which have been sapped by the loss of many leaders who went into exile, were jailed, or were declared ineligible to hold public office.

"You have to know how to meld the generation of the young with old-style politics," said another opposition leader, Henrique Capriles. He warned against the idea of treating Guaido as if he were a god-like savior.

In 2009 Guaido helped found a party called Voluntad Popular, or People's Will, which the government considers a terrorist group. In its pecking order he was below its leader, Leopoldo Lopez, and an outspoken lawmaker named Freddy Guevara, who has now taken refuge in the Chilean Embassy.

When it became Voluntad Popular's turn this year to hold the speaker of the national assembly job, the consensus was to give the post to Guaido. The opposition strategy was to argue that Maduro is usurping power, on grounds that his re-election last May was rigged, and that therefore under the constitution power must be passed on to the speaker.

"This created an opportunity" to reinvigorate the opposition, said Seijas.