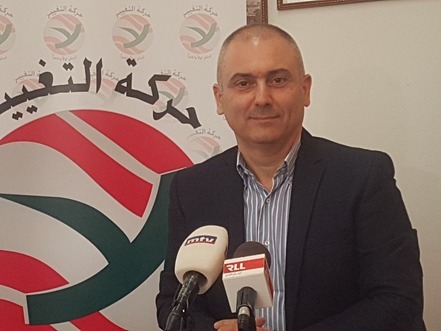 “Nasrallah’s words are a clear prelude to opening the doors wide for a new Iranian phase in Lebanon. It was clear that he is paving the government’s way towards Tehran,” said Mahfoud, one day after Nasrallah’s televised speech.

On remarks that Hizbullah won’t stand idle in case a war breaks out in Iran, Mahfoud said: “Lebanon and the Lebanese have nothing to do with wars raged outside their borders. Why would we be involved in more futile wars that were nothing more than an act of expelling our children to emigrate.”

In his speech, Nasrallah said: “If America launches war on Iran, it will not be alone in the confrontation at all.”

He also said that it would be “very easy” for Iran to solve Lebanon's chronic electricity problem while noting that it can also make a “huge transformation” in Lebanon's pharmaceutical industry that would “help us slash the medical bill of the state and citizens.”

To that, Mahfoud said: “A simple reminder about the health protocols that have been in effect for decades with the major manufacturing companies.”

On Nasrallah’s willingness to ask Iran to provide the Lebanese Army with weapons and air defense system, Mahfoud said: “The arming of the Lebanese army is a decision of the state. If you really want to help, why not open the depots of arsenals and rockets you own and offer them to the army. This is a beginning to uncover truthful intentions.”

Bravo and thank you for your courage.

There is a deeper heinous crime being committed by Kizballah here, not only are they bypassing the states institutions by suggesting that the state depend on Iran but also in parallel stating they are the state. This is rejected by any red blooded Lebanese and anyone who still has an iota of respect for his birthplace if it is Lebanon. The bearded goat periodically makes his statements and refers to Iran as he has to since that's who pays him as their lapdog the rest of the nation does not and will accept that period. History will not be kind to him and others who sell out so cheaply.

Elie Dude.. give the poor guy a beak.. hassin is barely scraping by.. on the $1300 a month salary.. minus "The Islamic Resistance®" dues.. the Iranians pay him... Winter is brutal this year.. and it gets real damp and cold in the sewers.. and warping himself up.. in that turban of his to stay warm.. does not cut it anymore... And thermal long johns cost money.. he's even having to put on two at the time.. or he'll get another pneumonia.. like last month.. with his weak immune system.. those can be deadly... hassin had to take a second gig!... And this one is a perfect fit.. Spokesperson, PR rep and mascot.. for the Islamic Republic of Iran... I bet the Iranians got the idea to hire him.. after they saw how effective.. that other clown.. Ronald McDonald.. is.. pushing Happy Meals®... A stroke of genius by the Iranians if you ask me..

Lol @ Rofl Israeli media is claiming that they are willing to provide the bearded goat with medical attention for free!! they said that since his party usurped power to Lebanese presidential sanctions Isralis have not lost one citizen. Another stated that Nassrallah should be awarded the coveted Katamon Medal for the protection of Israel! lol they love him for good reason.....

The takeover of Lebanon by Iran ... Goodbye Lebanon it was nice knowing you.

You cannot trust Hassan Nasrallah ... Satan the devil speaks with sugar and honey just like he did with Eve

The most important thing in life - where will you go when you die???
https://www.youtube.com/watch?v=VqofSS65bII