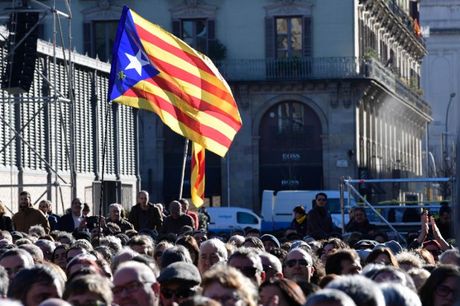 The trial of 12 Catalan separatist leaders involved in a bid to secede from Spain starts on Tuesday.

Here are key dates in the push for independence in Spain's wealthy northeastern region:

- March 2006: the Spanish parliament approves a new statute strengthening Catalonia's autonomy by increasing its fiscal and judicial powers, also describing the region as a "nation".

- 2010: Spain's Constitutional Court rules the use of the word "nation" has "no legal value". Hundreds of thousands of Catalans demonstrate in protest.

- September 11, 2012: On Catalonia's "national day", more than one million people demonstrate in Barcelona to call for their region to become a new state, during a severe financial crisis. Conservative prime minister Mariano Rajoy refuses to negotiate greater budgetary autonomy.

- November 2014: Catalonia defies Madrid with a symbolic, non-binding referendum on independence. Turnout is just 37 percent, of which more than 80 percent vote in favour.

- September 2015: pro-independence parties win an absolute majority in the Catalan regional assembly for the first time.

- November 2015: pro-independence lawmakers vote to start the process to secede by 2017 at the latest.

Turnout is about 43 percent, of which 90 percent back independence, according to Catalan authorities. Rajoy dismisses the referendum and King Felipe VI denounces the independence bid.

- December 21: with three separatist candidates in prison and others, including Puigdemont, in exile, pro-independence parties again win an absolute majority in regional elections.

Quim Torra becomes Catalonia's new president, paving the way for the region's autonomy to be restored.

- June 1, 2018: Rajoy is ousted in a no-confidence vote in parliament. He is replaced by Pedro Sanchez, a Socialist, who adopts a softer tone on Catalonia.

- July 2018: Sanchez and Torra meet as part of the start of negotiations over the ongoing secession crisis.

- September 11: A million people march through Barcelona in support of independence.

- October 9: separatists lose their majority in the Catalan parliament as Puigdemont and his supporters refuse to replace four lawmakers suspended by a court over the secession bid.

- February 12: Twelve Catalan separatists involved in the secession bid are due to go on trial in Madrid on rebellion charges.