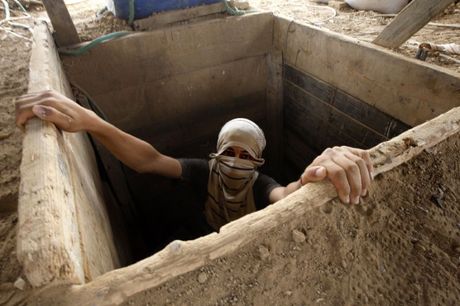 Two Palestinians including a Hamas policeman suffocated to death from gas in a cross-border tunnel under Gaza's frontier with Egypt, the enclave's interior ministry said Monday.

Civil defence crews, alerted on Sunday, retrieved the two bodies from the tunnel "after a great effort that lasted several hours", Bozum said in a statement.

He did not comment on the origin of the substance, but a Palestinian security source said the Egyptian military has used gas to halt the use of illegal tunnels it finds along the borde

The Egyptian army could not be re2ndached for comment Monday but in 2010 Cairo denied similar charges after the deaths of four Palestinians in a border tunnel.

Tunnels have in the past been a key way for Gazans to skirt a decade-long Israeli blockade and, until recently, Egypt's closure of its crossing with the enclave.

They once served as a lifeline for the cramped territory of two million people squeezed between Israel, Egypt and the Mediterranean Sea.

But the passages have also been used to bring in weapons by Hamas, the enclave's Islamist rulers who have fought three wars with Israel since 2008.

Egypt closed or destroyed dozens of tunnels after the overthrow of its Muslim Brotherhood President Mohammed Morsi, an ally of Hamas, in 2013, though several remain.

Tensions between Egypt and Hamas have eased in recent years and many Egyptian goods are now imported in to Gaza openly through the Rafah border crossing.

Why do you call the Gaza Strip an enclave?
An enclave is one territory completely surrounded by the territory of another. In the case of the Gaza Strip it is bordered by three entities, Egypt, Israel and the Mediterranean Sea, so in no way can it be called an enclave. In all effects it is almost exactly the same as Lebanon, where Syria replaces Egypt.