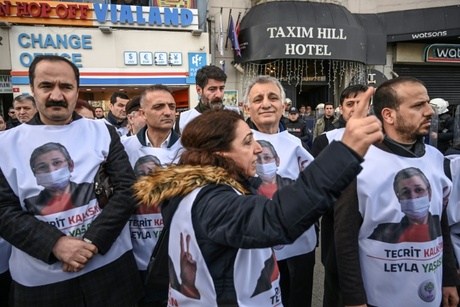 Dozens of Turkish police blocked a march by pro-Kurdish opposition lawmakers in Istanbul on Monday that was organized in solidarity with a hunger striking MP who was released from prison last month.

Security officers carrying anti-riot shields surrounded around 40 MPs and activists from the pro-Kurdish Peoples' Democratic Party (HDP) to prevent them from walking down Istiklal Avenue in the heart of the metropolis, AFP journalists said.

They were attempting to protest in support of HDP lawmaker Leyla Guven, who has been on hunger strike for nearly a hundred days calling for improvement in the prison conditions for Kurdish militant leader Abdullah Ocalan, leader of the outlawed Kurdistan Workers' Party (PKK).

"We are here to join our voices with Leyla Guven, to lend our strength to her fight," said HDP co-leader Sezai Temelli.

Protesters wearing vests bearing images of Guven tried unsuccessfully to push against the wall of police shields. After a short sit-in, they dispersed.

She was released last month but her supporters remain worried about her health, as she continues to subsist on only sugared or salted water in an effort to pressure the Turkish government to allow Ocalan to hold regular meetings with his family members and lawyers.

Ocalan, who was arrested 20 years ago, is serving a life sentence on Imrali island, close to Istanbul.

His PKK is proscribed as a terrorist group by Ankara, the European Union and the United States.

The authorities allowed the PKK leader to meet his brother Mehmet last month, the first visit in over two years.

HDP has said over 300 prisoners are also on hunger strike in solidarity with Guven.

"We will not let allow our comrades lose their lives. We have come together here to prevent that," Pervin Buldan, HDP co-leader, said.

Interior Minister Suleyman Soylu had warned on Sunday that the HDP protest would be banned.