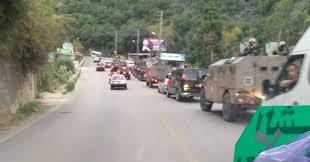 Assistant State Commissioner to the Military Court Judge Fadi Akiki announced Friday that the gunshot that killed Mohammed Abu Diab during the Jahliyeh incidents was not fired by the Internal Security Forces.

In a report wrapping up his investigations, Akiki also filed a lawsuit against persons unknown over the death of Abu Diab, who was one of ex-minister Wiam Wahhab's bodyguards.

“We will meet in court and no one will be able to vindicate the security force except the court,” the party said.

“We have an ISF forensic report that says that a U.S.-made bullet struck the martyr Mohammed Abu Diab from a distance of 320 to 360 meters,” the party added, noting that the ISF uses bullets of the same caliber (5.56mm) mentioned in Akiki's report.

“Everyone knows and the official licenses reveal that the guards of ex-minister Wiam Wahhab's house use Russian-made rifles of the 7.67mm caliber,” the party said.

It added that party chief Wahhab will hold a press conference on Saturday in which he will urge President Michel Aoun, the justice minister and the state commissioner to the military court to “put an end to Akiki's farce.”

Abu Diab was killed as gunfire erupted during an ISF raid to inform Wahhab of the need to appear before a court over remarks he voiced against Prime Minister Saad Hariri.

The Yids shot him from Telaviv....

They killed one of their own then they accuse the coppers. These must be Syrian inbreds.