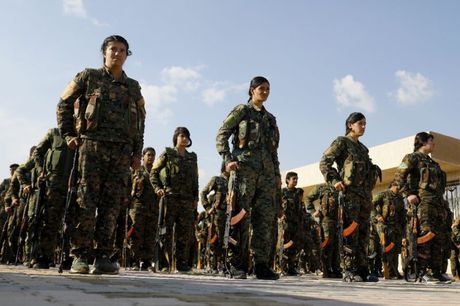 A top Kurdish official has called on Europe not to abandon Syrian Kurds once the battle against the Islamic State group is over and to help set up an international force to protect them from Turkey.

European powers "have a political and moral responsibility" to the Kurds, Aldar Khalil told AFP in a interview in Paris, warning that the Kurds would seek the protection of Syrian President Bashar al-Assad if failed by Europe and the U.S.

The Kurdish-led Syrian Democratic Forces (SDF) have been leading the fight against the Islamic State group in Syria for the past four years, backed up by air strikes from a U.S.-led coalition.

With IS' self-declared caliphate now in ruins, the Kurds fear being left at the mercy of Turkey after the U.S. declares mission accomplished in the final battle currently underway for the jihadists' last Syrian holdout.

Turkey, which has been battling a Kurdish insurgency on its own soil since 1984, views the Kurdish fighters that dominate the SDF as terrorists and has threatened to invade areas under Kurdish control in northeast Syria.

Khalil, who played a key role in establishing Syria's semi-autonomous Kurdish region in 2013, appealed to Europe for protection.

"If they (Europe) don't meet their commitments they are effectively abandoning us," Khalil said late on Sunday, calling on France particularly to work at the United Nations for the creation of a buffer zone along the Turkish border.

"France can table a proposal to the Security Council on our protection, suggesting an international force between us and the Turks -- of which it would be part -- or to protect our airspace," he said.

The senior political representative said that it could be modeled on the U.N. peacekeeping force deployed along Lebanon's border with Israel.

But European powers have already rebuffed U.S. proposals for an observer force that would stay on in northeast Syria, fearing they will have to bear the burden once the U.S. pulls out.

"They're trying to manage the consequences of a hasty decision and making us carry the responsibility," a French government source said last week.

U.S. President Donald Trump caused shock among America's Western and Kurdish allies in December by announcing plans to withdraw U.S. troops from Syria even before the end of the fight against IS.

The withdrawal would leave the Kurds, who control nearly 30 percent of Syria, including the cities of Qamishli, Hasaka and Raqqa, exposed to a long-threatened attack by Turkey.

The Kurds fear a repeat of the Turkish offensive that drove Kurdish fighters and civilians out of the northwestern Syrian city of Afrin last year.

They have also warned the West that the foreign jihadists currently languishing in Kurdish jails could escape and urged their countries of origin to take them back.

On Monday, EU foreign ministers will meet in Brussels to discuss the issue, which has taken on greater urgency as the battle for IS' last redoubt ramps up.

The jihadists are trapped in less than half a square kilometer in eastern Syria near the Iraqi border.

Khalil said that the Kurds would seek protection from Assad unless their Western allies stepped up -- and he spelled out the terms of a possible deal.

"We will be obliged to agree a deal with the (Syrian) regime so that it deploys its troops along the border and protects us," Khalil explained.

He said that the Kurds would insist on maintaining autonomy and demand that the border troops be from Kurdish areas.

"They would come under the orders of the Syrian army, but be our units," he said, adding that foreign fighters would be kept under Kurdish guard and not handed over to Assad's forces.

In return, the Kurds would offer to give Assad, who is anxious to win restore sovereignty over the biggest area beyond government control, a cut of the Kurdish region's oil revenues.

"We can also agree to raise the regime's flag," Khalil added.

But Western observers expect Assad, whose forces control about 60 percent of Syria, to take advantage of the Kurds' vulnerability and drive a hard bargain.

On Sunday, Assad warned them that the U.S. would not protect them against Turkey.

"No one will protect you except your state," he said.