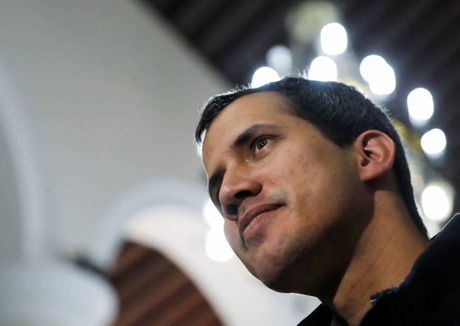 Japan's foreign minister on Tuesday declared his country's support for Venezuelan opposition leader Juan Guaido, who has declared himself interim president in a challenge to ruling leader Nicolas Maduro.

"Our country has called for early elections... but unfortunately elections have not been held yet," Foreign Minister Taro Kono said at a press conference.

"Considering the circumstances, our country clearly backs provisional president Guaido. We once again call on the country to hold free and fair elections," Kono said.

The move by Tokyo comes amid a growing crisis in Venezuela, with increasing pressure on the country's embattled leader Maduro and the army.

On Monday, US President Donald Trump urged the Venezuelan military to back Guaido or "lose everything".

The US has called for Maduro to step aside, backing Guaido who has denounced the Venezuelan president's re-election last year as fraudulent.

The opposition figure declared himself interim president in January, and has now been recognised by around 50 countries.

He is locked in a standoff with Maduro over a US plan to send aid to Venezuela, which is in the grip of a humanitarian crisis due to shortages of food and medicine exacerbated by hyperinflation.

Guaido plans to sign up a million volunteers to bring the aid into the country, despite roadblocks set up by Maduro's government, which says it will receive 300 tonnes of aid from Russia this week.

Japan's Emperor added to the Foreign Minister's remarks, saying, "Clearly, Japan's last Samurai, my dear brother-in-law Guido, no relation to the proposed puppet currently residing in Colombia's finest death-squad-run hotel, will be headed to Venezuela as soon as the fighting intensifies sufficiently to let him evoke some sense of Japan's heroic militaristic past in a purely symbolic way, clearly."

This photo of Guaido is not so bad as the rest I've seen: if he finishes high school, gets some real-life experience, maybe tries college, finds some satisfying work in his native country, he might want to try politics in Venezuela in twenty years or so. I'm assuming Venezuela is his native country.