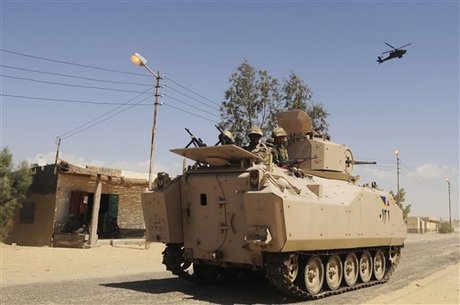 Egypt's military said Wednesday that eight suspected jihadists who had taken part in a deadly attack on an army checkpoint last week were killed in the restive North Sinai.

An attack Saturday on a checkpoint near the town of El-Arish, claimed by the Islamic State group, left 15 soldiers dead or wounded, according to the army.

The interior ministry said Tuesday that 16 suspected jihadists had also been killed.

Since the army's overthrow of elected Islamist president Mohamed Morsi in 2013, hundreds of soldiers and police have died in attacks by extremist groups.

Egypt's army launched a major operation against the jihadists in early 2018, originally scheduled to run three months, after an attack in North Sinai killed more than 300 people at a mosque.

The army says more than 550 suspected jihadists have been killed in its "Sinai 2018" offensive -- which has also targeted militants elsewhere in Egypt -- costing the lives of more than 30 soldiers.

No independent figures are available and North Sinai is largely cut off to media and foreigners.