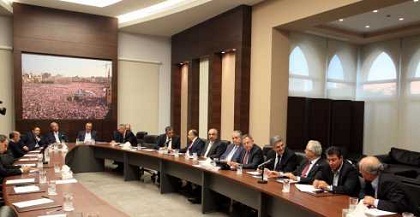 Al-Mustaqbal parliamentary bloc on Thursday decried “political treachery” against it and against Prime Minister Saad Hariri, after the Constitutional Council invalidated Dima Jamali's membership of parliament.

In a statement issued after an emergency meeting, the bloc regretted the Council's ruling but announced that it will deal with it “according to the applicable legal and constitutional framework.”

Slamming what it called “the political par excellence motivations” behind the Council's ruling, the bloc lamented “political interference” in the Council's work.

“A member of the Council reversed his signed report and his vote in a previous session following clear political interference, so that the Council could garner the seven votes needed to revoke Jamali's parliamentary membership,” Mustaqbal added.

“The bloc, which senses that a political treachery operation has targeted it and PM Saad Hariri in person, stressed that the ways of backstabbing and using the highest judicial posts to settle political scores will not deter it from its decision to protect the Constitutional Council from intruders,” the bloc emphasized.

Adding that it will stand by Jamali in Tripoli's upcoming parliamentary by-election to fill the vacant seat, Mustaqbal underscored that the lawmaker “proved within a few months her competence and special presence, which were lauded by citizens in her city in particular and in Lebanon in general.”

Earlier in the day, the Council revoked Jamali's membership of parliament without giving her seat to Taha Naji, who had appealed her win.

Al Mustaqbal of the past deserves everything coming its way. They accepted to amend the election law to please both hezbollah and aoun. Bear the consequences....

200% lol
its amazing we have a cultural thing it seems that we cannot either accept responsibility or struggle with accepting we did anything wrong. Mustaqbal like any other organisation like to shift the blame of their mistakes on others if not then its the weather or Israel!
Sorry Mustaqbal your your mustaqbal does not look so rosy given this is how you planned it!

Eh walla. The elections were rigged from the start when they agreed to this new electoral law that ensured the same protagonists remain in power ad vitam aeternam. They've got no one to blame but themselves and that's why many people didn't vote last May. Actually the majority boycotted them rendering them all illegitimate.