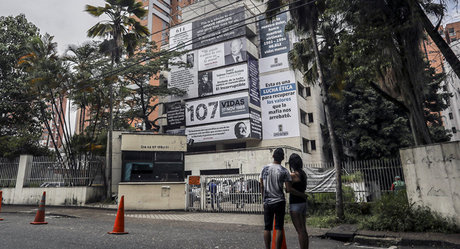 Authorities in Colombia carried out a controlled explosion on Friday to demolish the former fortress of drug kingpin Pablo Escobar in Medellin.

A crowd of 1,600 people including some families of Escobar victims, watched as just before midday a loud detonation was heard and the eight stories of white concrete crumbled to the ground, leaving behind a cloud of smoke that lingered for several minutes.

In its place will be erected a memorial to the victims of Escobar's reign of terror that ended when he was killed by police in 1993.

While some elements of society criticized the move, claiming it was erasing history, authorities insisted they were merely "transforming" the narrative to focus on the victims rather than the perpetrator.

The demolition of the ostentatious building, which had once drawn crowds of curious sightseers, "signifies the defeat of the culture of illegality," said Colombia President Ivan Duque.

"It signifies that history won't be written from the perpetrator's perspective."

Duque made a flying visit to the demolition site before heading to Cucuta, on the border with Venezuela, to attend a concert organized by British billionaire entrepreneur Richard Branson to raise money for humanitarian aid for Venezuelans.

Cucuta is the site of a collection center where tons of mostly U.S. aid has been piling up for two weeks ahead of an attempt by Venezuela's opposition leader Juan Guaido to bring it into the country, despite the border being blockaded by the military.

Escobar may be dead but Colombia remains the biggest producer of cocaine in the world, much of which is bound for the U.S.