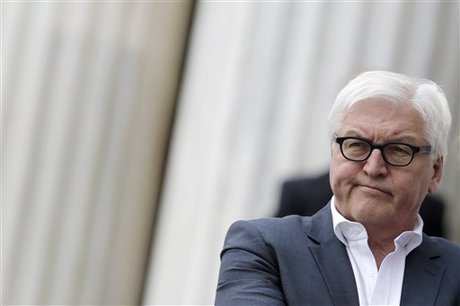 German President Frank-Walter Steinmeier came under fire for a congratulatory telegram sent to Iran for the Islamic revolution's 40th anniversary, with a Jewish leader on Monday joining a chorus of criticism.

Taking aim at Steinmeier for failing to include criticisms of the Islamic regime in his message, Josef Schuster, who heads Germany's Central Council of Jews, said that "routine diplomacy appears to have overtaken critical thinking."

"It is incomprehensible that sensitivity was missing," Schuster told the daily Bild.

"If it was necessary to send congratulations on this anniversary, then the president should have at least found some clear words criticizing the regime," he added.

For the foreign policy chief of the business-friendly FDP party, Frank Mueller-Rosentritt, the telegram must have felt like a "resounding slap in the face for our friends in Israel who are exposed to constant threats of annihilation by Iran."

The telegram has not been made public by the president's office.

But Bild last week quoted excerpts of the message, which it said included Steinmeier's promise to do all he could to implement a nuclear deal on limiting Tehran's atomic program.

The newspaper said there was no mention of Tehran's support for Hamas and Hizbullah in the message however.

Steinmeier defended his gesture during a telephone conversation with Schuster, but acknowledged in a statement to DPA news agency that "human rights are disregarded in Iran and Iran plays a destabilizing role in the region.

"The danger represented by an Iran armed with nuclear weapons is that much greater," he said.

At the government's weekly briefing, foreign ministry spokesman Rainer Breul said there had been a "misunderstanding."

"To our knowledge, the president did not send congratulations for the anniversary of the Islamic revolution. His congratulations were on the occasion of Iran's national day celebrations.

They fall on the same day.

"It is common practice for states that have diplomatic relations to send congratulations on national day celebrations," Breul said Friday.

"Chorus" was his singing in the shower: it creates an echo effect.