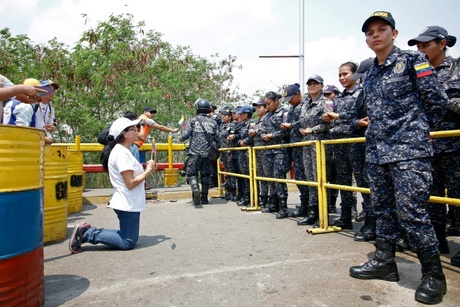 Some Venezuelans are living in limbo across the border in Colombia, trapped after a failed effort to bring humanitarian aid into their country.

That weekend drive turned violent as supporters of the opposition clashed with Venezuelan security forces on the borders with Colombia and Brazil, leaving four people dead.

So some Venezuelans who came across to volunteer in the aid shipment effort, or who work in Colombia but live in Venezuela, are suddenly trapped on the Colombian side.

One of those volunteers is Nicolasa Gil, 71, who says she does not mind having to sleep on the streets of the border town of Cucuta.

"What scares me is going over into my country, because we are safer here than there," she told AFP.

She recalled how she and other volunteers were trying to cross one of the bridges over the weekend with trucks carrying food and medicine and all hell broke loose at the midway point of the span when Venezuelan riot police intervened.

"As soon as we reached that point, they attacked us with tear gas and we had to leave the trucks. Those animals burned them," said Gil.

Gil said she had not been home to her native Venezuelan state of Merida since Saturday because she heeded opposition leader and self-declared interim president Juan Guaido's call for people to go into Colombia and bring back mainly US aid that has been stockpiled at the border.

Some 300 people were wounded in the clashes along the Colombian border.

On the streets of the Cucuta neighborhood closest to the Francisco de Paula Santander bridge, Colombian riot police are on patrol.

One walks past a woman named Elizabeth Machua as she tells her story.

She is Colombian, and for 30 years has lived across the border in the Venezuelan town of Urena. These days, she comes back to Colombia to work as a manicurist. That was her job in Venezuela too, but hyperinflation there has reduced people's wages to almost nothing.

On Thursday she kissed her three-year-old son Adan Alejandro goodbye before leaving him at a nursery, and crossed the border into Colombia. Now, because of all the unrest, she can't get back home. She sleeps at the home of a work colleague.

Machua says she is having a hard time reaching the babysitter who is now looking after her boy. She can't reach anyone else, either.

"I imagine they are blocking calls," said Machua, who is 40. She said she is so furious she is considering supporting the idea of the use of military force to oust Maduro. US President Donald Trump says he has not ruled out this option.

"What must happen, let it happen," said Machua. She said no one is telling her when she will be able to go home and be with her son.

On the same street, John Carlos Gaitan, 31, is drinking water out of a plastic bag. He and some friends came to Colombia Friday for a fund-raising concert supported by Guaido and the opposition.

Now he can't get home either and for the first time in his life is living on the street.

Gaitan said he and his friends are considering trying to sneak back into Venezuela using one of some 30 illegal border crossings that police say exist in the Cucuta area.

But that's dangerous, he said, because some of those paths are controlled by smugglers, drug traffickers or pro-government armed gangs like those which attacked protesters on Saturday.

Gaitan said there were reports that some of those gangs are looking in the news media for pictures of opposition supporters in order to attack them when they cross back into Venezuela.

"I wish I were with my family," said Gaitan.