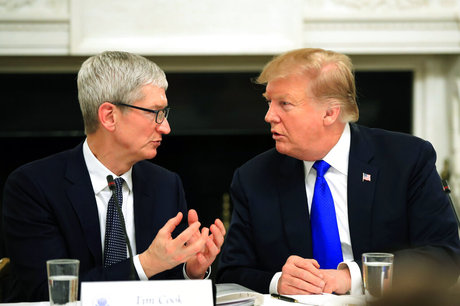 Widely mocked for calling Apple CEO Tim Cook "Tim Apple" to his face, President Donald Trump came up with an explanation Monday: it wasn't a gaffe, he was just being succinct.

Trump said his apparent slip-up at a White House roundtable with business leaders last Wednesday had been on purpose.

"I quickly referred to Tim + Apple as Tim/Apple as an easy way to save time & words," Trump explained on his Twitter feed.

"The Fake News was disparagingly all over this, & it became yet another bad Trump story!"

During remarks at the roundtable, Trump raised eyebrows when -- with Cook sitting to his right -- he said: "We appreciate it very much, Tim Apple."

Cook took the stumble humorously, later changing his Twitter profile to Tim with the Apple logo.

But Trump, rather than let the matter rest, appears to be trying to have the last word.

According to Axios news site, he came up with a different explanation during a private meeting of Republican donors in Florida on Friday.

The report said that he had told puzzled Republicans that he'd really said "Tim Cook Apple," but that "Cook" was said very quietly, then ignored by the media.

Video recordings of the president speaking on Wednesday clearly show he did not say "Cook."