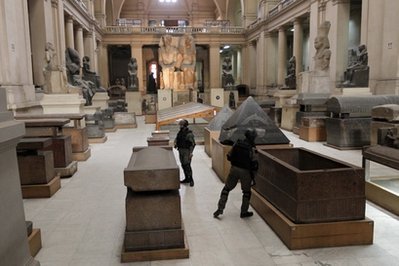 The United Nations cultural organization urged Egyptian authorities and protesters Tuesday to protect the country's heritage and respect freedom of expression during the ongoing political crisis.

There have been reports of a looting attempt at Cairo's renowned Egyptian Museum and other historical sites, as well as of citizens taking it upon themselves to set up a cordon to protect their nation's heritage.

"My compassion goes first to the victims of the civil unrest and their families," said UNESCO director Irina Bokova, as reports collated by AFP pointed to around 125 deaths during the recent protests.

"Egyptian cultural heritage, both its monuments and its artifacts, are part of the ancestral heritage of humanity, handed down to us through the ages," she said, in a statement from UNESCO's Paris headquarters.

"The value of the 120,000 pieces in the Egyptian Museum in Cairo is inestimable, not only in scientific or financial terms, but because they represent the Egyptian people's cultural identity.

"The proof, hundreds of citizens spontaneously formed a chain around the museum to protect it," she said.

"I solemnly request that all necessary measures be taken to safeguard Egypt's treasures, in Cairo, Luxor and in all the other cultural and historical sites around the country."

Bokova also expressed concern that President Hosni Mubarak's regime has cut off Internet access and resorted to arresting and harassing journalists as it attempts to hold on to power.

"It is crucial that both national and foreign press be allowed to perform their duty of informing the public from an objective perspective," she said.

Bokova spoke out as thousands of protesters were massing in Cairo for the biggest day of protest yet in the popular revolt against Mubarak's rule.