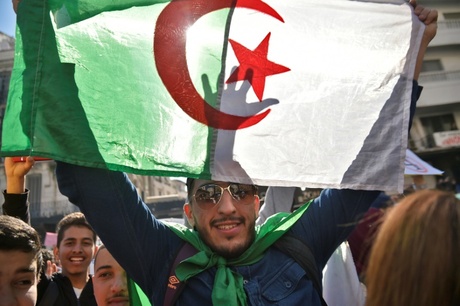 Hundreds of school teachers and students protested in the Algerian capital on Wednesday amid fears that President Abdelaziz Bouteflika plans to extend his two-decade rule.

In a surprise announcement Monday, the ailing 82-year-old said he would not stand for a fifth term -- but also cancelled next month's presidential election.

After initial celebration following Bouteflika's announcement, protesters returned to the streets of the capital Tuesday, accusing the 82-year-old of "tricks".

On Wednesday, an AFP correspondent saw middle and high school teachers protesting alongside their students in central Algiers.

"It's important that we teachers mobilise," said Driss, a teacher at a high school in the Algerian capital. "It's about the future of our children."

The protesters carried signs saying: "No to the extension of a fourth term!"

Schools in Algeria have been hit by a partial strike in recent days as protests have repeatedly rocked the capital and other major cities.

University students have been at the forefront of the movement, in a country where half the population is under the age of 30 and many have never known any president other than Bouteflika.

The veteran leader's promise of a "national conference" to carry out reforms and set a date for new elections "before the end of 2019" suggested he may stay in office for another year.