What to Expect from Turkish Local Elections? 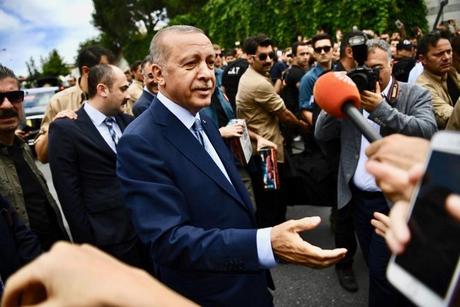 Turkey's ruling Justice and Development Party (AKP) led by President Recep Tayyip Erdogan will be looking to score another victory in local elections on March 31.

But the party faces challenges from a more united opposition, a recession and fatigue among voters which experts say could translate into lower turnout.

The AKP will likely remain the largest party even if some experts say it could win by a smaller percentage of the vote.

After parliamentary and presidential elections last year, Erdogan sought to refresh the AKP saying it suffered from "metal fatigue".

He exerted his dominance after becoming party chairman again in 2017 by kicking out the mayors of Istanbul and Ankara.

The polls this month will be the first municipal elections in which the AKP will field joint candidates with the right-wing Nationalist Movement Party (MHP).

The two parties formed the People's Alliance last year before presidential and parliamentary elections, the first time the AKP ran with another party in a formal alliance.

There are 30 metropolitan municipalities in Turkey including Ankara, Istanbul and Izmir while there are 51 provincial municipalities.

Depending on their municipality, voters will choose city mayors as well as other local posts such as district mayors, members of district assemblies and neighbourhood chiefs.

The elections come at a tricky time for the AKP, which has won many past ballots based on its perceived economic prowess.

But the economy is at the forefront of voters' minds with inflation in double-digits and Turkey tumbling into its first recession since 2009 after a currency crisis battered the lira.

With voters already worried whether they can afford staples such as peppers and aubergines, the economic slowdown will leave households further stretched.

But experts including Menderes Cinar, professor of political science and international relations at Baskent University, warned the "bad state of the economy" would not necessarily mean the AKP would suffer huge losses.

"The AKP may lose some votes because of its mismanagement of the economy, but the magnitude of that loss may not be big enough to consider the elections a loss for the AKP," Cinar said.

Key areas where the opposition Republican People's Party (CHP) could do well are Ankara and the southern provinces of Adana, Antalya and Mersin as well as Bursa in the northwest, said Berk Esen of Bilkent University.

Voter turnout will be key.

"These elections are an important chance for voters to show their feelings" about current local authorities, Burak Bilgehan Ozpek, associate professor of international relations at TOBB University said. "There are frustrations with all parties."

Yakup Peker, at the Ankara-based TEPAV think-tank, said the AKP or its People's Alliance could lose voters who "might not come out and vote", partly because of a lack of alternatives.

But opposition voters are equally unhappy, he said.

In a bid to unite against Erdogan's AKP, the pro-Kurdish HDP co-leader Pervin Buldan said the party sought to ensure the AKP-MHP alliance's defeat by not running in western provinces and thus helping "other democratic forces (CHP)".

- Can the opposition win Ankara? -

But experts say the opposition was unlikely to take Istanbul from the AKP with its high-profile candidate former prime minister Binali Yildirim.

Yet Ozpek said, "there is competition in Ankara".

Mansur Yavas, Ankara mayoral candidate for the CHP and nationalist Good Party, who ran previously in 2009 and 2014, may have a stronger chance of taking the city from AKP.

Yavas told AFP he believed he has the advantage since he represented two parties. After issues in 2014 over the validity of the results, he also promised more scrutiny of ballot boxes during the vote.

"The Good Party will take their place with the ballot boxes as will the (CHP). And I have my own volunteers who have no links to any party as well," Yavas added.

But he criticised "unfair" campaigning, accusing his AKP competitor Mehmet Ozhaseki of using "the municipality's tools" at his disposal.

Ozhaseki has also been criticised by some as an imported candidate since he is not from Ankara but the Anatolian city of Kayseri.

"We are absolutely not equal in this race, but despite this, I feel I have public support behind me and God willing I will win," Yavas said.