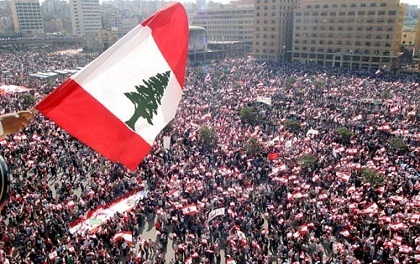 Lebanese leaders and social media activists on Thursday commemorated the 14th anniversary of the March 14, 2005 uprising, which is also known as the Cedar Revolution.

The uprising took the form of a mass rally that gathered hundreds of thousands of demonstrators in central Beirut in the wake of the February 14, 2005 assassination of ex-PM Rafik Hariri in a massive suicide truck bombing that also killed 21 other people and injured dozens.

“March 14, 2005 was a historic day on which the Lebanese laid the foundations for the project of the state, sovereignty and freedom. It was a project of a long struggle which we are continuing to achieve through consolidating security and economic stability, protecting coexistence and strengthening state institutions and our democratic system,” Prime Minister Saad Hariri, who is also the head of al-Mustaqbal Movement, tweeted.

Lebanese Forces leader Samir Geagea meanwhile said that for the LF, “every day of the year is March 14.”

“It is the revolution of a human and the spirit of a country. It is not a memory or a picture in mind but rather an approach and a practice aimed at achieving Lebanon's rise,” he tweeted.

LF bloc MP Ziad Hawwat meanwhile said March 14, 2005 was the day that “transferred Lebanon from tutelage into freedom and sovereignty, although sovereignty is still incomplete.”

The March 2005 uprising eventually led to the withdrawal of Syrian forces from Lebanon, curbing Syrian influence, the formation of an international inquiry panel into Hariri's murder and the resignation of Omar Karami's government and the heads of security agencies.

Those so called leaders should be in hiding for wasting all the sacrifices made by the Lebanese people on March 14. The same celebrating leaders are the ones who brought aoun to the presidency and gave hezbollah total control of the Lebanese state.

What in the world are they celebrating!