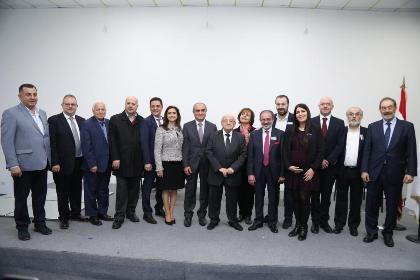 The Heritage and Renewal list led by ex-MP Naamatallah Abi Nasr has won all the seats of the Maronite League and the former lawmaker has been elected as its president.

“We thank everyone who took part in this democratic carnival despite the bad weather, especially those who flocked from the remote areas of the North, the Bekaa and the South, to confirm the League’s unity and confidence in our list’s patriotic rhetoric,” Abi Nasr said after the results were announced.

“We are open to the various Maronite figures, be them partisan or nonpartisan, because that carries a great hope to implement the League’s projects and decisions through them – the Maronite MPs and ministers,” the ex-MP added.

He said the League’s projects and decisions aim to “put an end to the manipulation of Lebanon’s democracy by a component at the expense of another through citizenship laws, naturalization and the selling of land, and before anything else the disaster of the Syrian refugee presence.”

“The turnout exceeded 85% and this confirms that the base was not affected by the campaigns of distortion, all the malicious rumors and the attempts at eliminating our approach and silencing our rhetoric,” Abi Nasr went on to say.

“We extend our hand to the comrades who were not lucky, so that we work together for the sake of the League and in support of the positions of the Presidency and Bkirki,” he added.