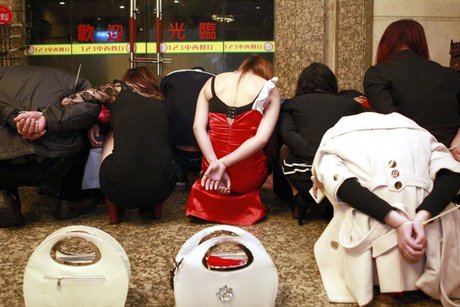 When Chinese legislators recommended the abolition of "education" detention centers where prostitutes and clients can be held without charge for two years, activists hoped the facilities' days were numbered.

They will have to wait longer.

The rubber-stamp National People's Congress (NPC) passed only one new law when it ended its annual session on Friday -- and it had to do with opening up foreign investment.

Under the nearly three-decade-old system, police have unilateral power to detain sex workers and their clients for up to two years in "shelter and education" centers.

Critics say the centers have little to do with education.

"There may be resistance inside the regime against abolition, perhaps by the police, as this would take away some of its arbitrary detention powers," said Wang Yaqiu, a researcher at Human Rights Watch.

In 2013, testimonies of ex-detainees collected by Asia Catalyst -- an organization that defends the health of marginalized groups in the region -- revealed the harsh living conditions in the centers.

These included ill-treatment, forced labor, and the obligation to pay for subsistence and forced medical examinations at prohibitive prices.

"All this is a matter of money, the talk of rehabilitation or ideological education is hollow, it is just a way of extorting money on behalf of the state and the police", one of the women told the group.

Shen Chunyao, chairman of the NPC Standing Committee's legislative affairs commission, said in December that "the time has come to begin the work of abolition."

"In recent years, the use of the detention and education system has gradually decreased, the number of people in the centers has clearly diminished and they have been banned in some places," he added.

Discussion over the future of the centers came after China's top legislative committee abolished its system of "re-education through labor camps", known as "laojiao", in 2013.

Shutting the labor camps -- introduced more than half a century ago as a speedy way to handle petty offenders -- closed the curtain on a dark aspect of the country's modern history long criticized by human rights groups and which Chinese officials admitted was no longer viable.

But authorities retained the right to detain sex workers and their clients, and in 2014 police announced that popular actor Huang Haibo would be held for six months for having solicited a prostitute.

That prompted a rare instance of dissent from state media, which questioned the system.

Getting rid of the detention centers would be "a very positive step for the rule of law in China", said Shen Tingting, director of advocacy and policy at Asia Catalyst.

Many living in Beijing were driven out with migrant workers as part of a demolition campaign in the city's slums in 2017.

"Today they are in the suburbs, isolated, with no place to work. They go online and go to the customer's house, it's very dangerous," Shen said.

She said the existing legal arsenal is already "sufficient" -- prostitutes and their clients can be fined up to 5,000 yuan ($745) and face up to 15 days of administrative detention.

But Shen is unconvinced that attitudes towards sex workers would change, even if the forced re-education of prostitutes eventually disappears.

"The repression will continue," she said, "and one wonders what new system (could) replace the old one."