Pompeo to Visit Lebanon, Kuwait and Israel this Week 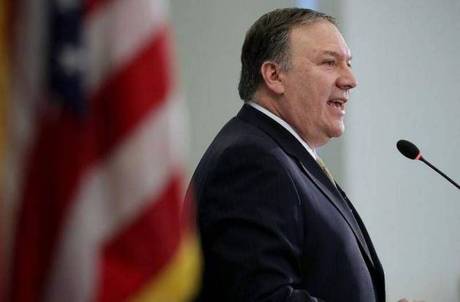 U.S. diplomatic chief Mike Pompeo travels to the Middle East this week stopping first in Kuwait, Israel, then Lebanon in order to bolster efforts to push back against Iran.

In Lebanon, where Pompeo travels after Israel, one of the principal topics will be Hizbullah, which the United States considers a terrorist group that works at Iran's behest.

In Israel, Pompeo will meet Prime Minister Benjamin Netanyahu, a close ally of Donald Trump's administration in the midst of a heated re-election campaign.

The common thing in each of those places is helping those countries bolster their efforts to push back against the Islamic Republic of Iran," Pompeo told Fox News.

The Trump administration has repeatedly clashed with Tehran, also an arch foe of the Jewish state.

In Jerusalem, Pompeo "will reaffirm both privately and publicly during that visit our unwavering commitment to Israel's security and its right to self-defense," a senior State Department official said.