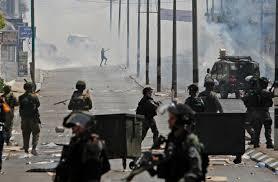 Two Palestinians were killed by Israeli forces in clashes near a flashpoint religious site in the occupied West Bank overnight Wednesday, the Palestinian health ministry said.

The health ministry said Raid Hamdan, 21, and Zaid Nouri, 20, died after being shot late Tuesday by Israeli troops near the Joseph Tomb's religious site close to the Palestinian city of Nablus.

The Israeli army said in a statement explosives were hurled from a vehicle as Jewish worshippers visited the site late Tuesday.

"Troops responded with live fire towards the vehicle."

There were no reports of injuries on the Israeli side.

The site has long been a source of tension in the Israel-Palestinian conflict.

Jews believe the site contains the remains of the biblical patriarch Joseph, one of the 12 sons of Jacob.

It is located near a Palestinian refugee camp in the West Bank, the territory occupied by Israel for more than 50 years.

Israeli "Jews" (according to their government registration) are very sensitive to loud noises and tend to open fire randomly.