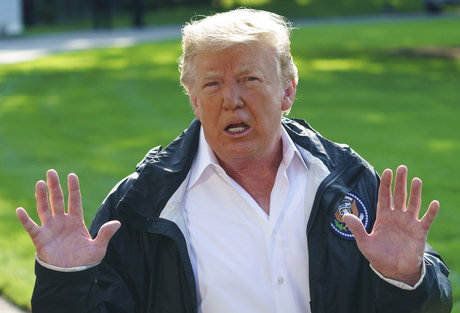 "After 52 years it is time for the United States to fully recognize Israel's Sovereignty over the Golan Heights," Trump said in a tweet.

Trump called the Golan -- a strategic area seized from Syria and annexed in a move never recognized by the international community -- "of critical strategic and security importance to the State of Israel and Regional Stability!"

About 20,000 Israeli settlers live in the Golan, which overlooks Syrian territory.

Trump's abrupt announcement was immediately cheered by Netanyahu, who faces a tough reelection battle and visits Washington next week.

"At a time when Iran seeks to use Syria as a platform to destroy Israel, President Trump boldly recognizes Israeli sovereignty over the Golan Heights," the right-wing prime minister wrote on Twitter. "Thank you President Trump!"

There was also quick approval from the senior Republican in the U.S. Senate, Lindsey Graham, who is pushing for Congress to recognize Israeli control over the Golan.

Trump's announcement coincided with a visit by Secretary of State Mike Pompeo to Jerusalem, where he became the first high-ranking American official to visit the Western Wall alongside an Israeli prime minister -- another boost for Netanyahu.

However, Leon Panetta a veteran Democrat who served as CIA director and defense secretary, among other roles, blasted Trump for "tweeting out another policy that obviously has not been worked out with our international partners."

The Golan recognition is only the latest diplomatic bombshell dropped by Washington, which is Israel's main backer, in seeking to redraw the fraught Middle East map.

In 2017, Trump also went against decades of practice in recognizing the disputed city of Jerusalem as Israel's capital, rather than the previously accepted Tel Aviv.

The Golan Heights move was hinted at a week ago when the State Department changed its usual description of the area as "occupied" to "Israeli-controlled."

The Trump State Department has likewise dropped previous definitions of the Palestinian territories of the West Bank and Gaza Strip as being "occupied" by the Jewish state.

It later annexed the Golan Heights and East Jerusalem in moves never recognized by the international community.

During Pompeo's Jerusalem trip, there was also speculation that his Western Wall visit with Netanyahu could be interpreted as tacit approval of Israel's claim to sovereignty over the site. The wall is one of Judaism's holiest spots, but located in mainly Palestinian east Jerusalem.

Trump's latest shakeup comes ahead of the expected unveiling of a White House plan for Israeli-Palestinian peace. Palestinian leaders, who broke off contact with Washington after the recognition of Jerusalem by Trump, say they expect the plan to be blatantly biased in favor of Israel.

Panetta, who was speaking on CNN, said the Golan recognition "gives up one of the chips that everyone thought would be part of a Middle East peace agreement deal."

"It's going to create real problems with our Arab partners in that part of the world," he said.

Trump will host Netanyahu at the White House next Monday and Tuesday. The Israeli leader will be in Washington for the annual conference of the powerful American Israel Public Affairs Committee (AIPAC) pro-Israel lobbying group.

Netanyahu, who is campaigning under threat of indictment for corruption, is hoping that the strong U.S. backing will help push him over the finish line.

But Robert Malley, president of the Crisis Group consultancy, said the "intensely political" decision by Trump was "in disregard of international law" and "an ominous step at a time when voices in Israel calling for the annexation of the West Bank are growing louder."

Instead of getting yourself all worked up with you regular ALL CAP idiocies about something happening across the border shouldn't you be asking the Syrian regime to fully recognize Lebanese sovereignty over Shebaa and Kafr Shuba by supplying the UN with the appropriate maps and documents? If you recall Israel got them from the Syrians at the same time it got the Golan. What were Shebaa and Kafr Shuba doing in Syrian hands then? No wait don't tell me I remember, the Syrian army had invaded them by force, attacked the Lebanese security personnel posted there and occupied them. Never mind answering, I forgot that paid puppets like yourself don't even recognize Lebanon as sovereign state.

Good points MrK, alas your wasting your energy and words on a guy who works in a gas station in Michigan and has neither the intelligence or mental capacity to comprehend your comments. He does however abide by his Ayatollas call to washing his mind and feet several times a day.

So it's fine when Morocco unilaterally annexes the Saharan Arab Democratic Republic (former Spanish Sahara) because they are both Arab and Moslem, but when a non-Moslem country does this it is condemned.
Where were all the protests in the Arab World when Russia annexed Crimea a few years ago, or when Turkish forces occupied the northern part of Cyprus in the 1960's.

Phillipo you should know by now that a muslim killing another is hallal but placing the picture of the prophet in a newspaper is blasphemy. You have to get your priorities on importance here lol.