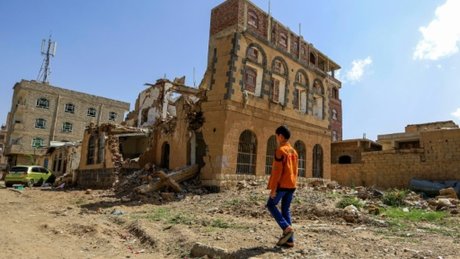 At least seven people, including four children, were killed and eight injured in an air strike near a hospital in Yemen, Save the children said on Tuesday.

"Two other adults are unaccounted for.

"A missile struck a petrol station near the entrance to Ritaf rural hospital, about 100 kilometres (60 miles) from the city of Saada in the northwest of the country, at 9:30 am."

Among those killed were health workers and security guards, said Save the Children, calling for "an urgent investigation into the latest atrocity".

"We are shocked and appalled by this outrageous attack," said Helle Thorning-Schmidt, the chief executive of Save the Children International.

"This hospital is just one of the many Save the Children supports across Yemen, delivering life-saving aid to children living in what is the worst place on earth to be a child.

"These children have the right to be safe in their hospitals, schools and homes. But time after time, we see a complete disregard by all warring parties in Yemen for the basic rules of war. Children must be protected."

The Saudi-backed government has been battling the Iran-aligned Huthi rebels since 2014 in a war that has triggered one of the world's worst humanitarian crises.

The war escalated in March 2015 when a Saudi-led military coalition intervened against the rebels.

Around 10,000 people -- mostly civilians -- have been killed and more than 60,000 wounded since the coalition joined the conflict, according to the World Health Organization.

But the exact numbers are not known and aid groups warn the toll is likely to be significantly higher, with Action Against Hunger putting it at more than 57,000.