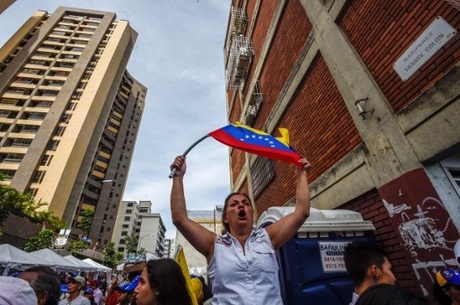 Venezuelans wavered between despair and rage Wednesday as they endured a third day of a near-nationwide blackout that has paralyzed their country -- the second such outage this month.

"Food stocks are starting to rot. There's no water. The transport virtually doesn't work. There's no means of communication," said Nestor Carreno, who was forced to shutter his pizzeria in a formerly upscale district of Caracas.

"I don't know how my family is doing. Insecurity is growing."

A cacophony of saucepans being banged out of windows and car horns in the street has filled the capital since the start of the vast outage.

Memories of the first, which began March 7 and lasted a week -- forcing citizens to seek water from rivers and sewage outflows as pumps came to a halt -- fed the anguish. Many residents stocked up on food and water.

The government of President Nicolas Maduro, which blamed the blackouts on US "cybernetic" attacks and opposition "sabotage" and "terrorism," ordered the closure of public offices and schools, which was extended to Thursday.

Communications Minister Jorge Rodriguez said a new power cut had plunged some parts of Caracas and other regions into the darkness once again, shortly after electricity had been restored.

He said work was continuing to fix "equipment damaged by terrorism."

The outage was affecting 21 of Venezuela's 23 states, according to social media users.

The government has given no official information on its scale.

Juan Guaido, the opposition leader whom the US and many of its allies recognize as the country's interim president over Maduro, called for a national protest on Saturday over "the lack of public services."

He has rejected the government's allegations that the opposition was behind the latest blackout as "lies."

Maduro responded to Guaido's planned national protest by calling for a "large mobilization" in defense of his government on Saturday.

"You don't know if you'll be able to get back home if you've gone out to look for something to eat or, now, power or water. We are living through the worst that you can live through in Venezuela," she said.

Power cuts have become frequent in Venezuela over the past few years, underlining the long slide into crisis that the country, once South America's wealthiest, has experienced.

But this month's blackouts were unprecedented in scale. Experts calculate they cost Venezuela's economy $200 million per day.

In both cases, the government said they were caused by disruptions at the country's main power plant, the Guri hydroelectric dam on the Orinoco River in the south that supplies 80 percent of Venezuelans' power.

Outside of the anxiety and political exchanges over the blackout, the presence of Russian troops in Venezuela has made the climate more febrile.

"It seems (Maduro's government) doesn't trust its own troops, because it is importing others... once again violating the constitution," Guaido said in the opposition-run congress on Tuesday.

Under Venezuela's constitution, any foreign military mission in the country needs to be approved by the congress.

Russia, Maduro's main ally and one of its biggest creditors along with China, sent 100 troops and 35 tons of military equipment aboard two flights to Caracas over the weekend.

Moscow said it was done in "full respect for (Venezuela's) legal norms" and to head off what it described as a US-organized "coup."

But US President Donald Trump, who has repeatedly warned that "all options" were available to deal with Venezuela, said "Russia has to get out."

He spoke at the White House with Guaido's wife, Fabiana Rosales, at his side.

Trump said Maduro and his government "have no money, they have no oil, they have no nothing. They've got plenty of pressure right now. They have no electricity."

"Other than military you can't get any more pressure than they have... All options are open," he added.

For her part, Rosales told reporters that she denounced "the new wave of repression and persecution exacerbated by the regime."