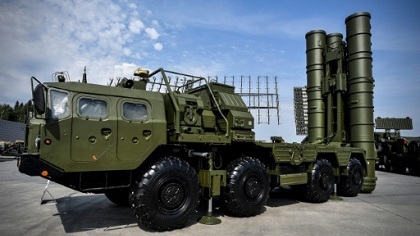 Turkey's government on Friday rejected US pressure over its disputed deal to purchase Russian missiles, saying Ankara was already in talks over delivery of the S-400 defence system.

US officials have warned Turkey could face possible sanctions and a block on its participation in the US-made F-35 fighter jet programme because of the Russian deal.

"We have signed a deal with Russia, and this deal is valid. Now we are discussing the delivery process," Foreign Minister Mevlut Cavusoglu said during a press conference with his Russian counterpart in the Turkish city of Antalya.

"We have an agreement with Russia and we are bound by it," he said, adding pressure from other countries was against international law.

Cavusoglu said Turkey had also met its obligations as a partner in the F-35 jet made by US company Lockheed Martin.

"Turkey is also a partner in the F-35 project. Some parts are being made in here in Turkey. Turkey has fulfilled its responsibilities in this regard," the minister said.

The first Russian S-400 delivery is expected in July.

The dispute is one part of a growing rift between Washington and Ankara who are at odds over Syria and also a US refusal to extradite a US-based preacher Turkey blames for a 2016 failed coup.

In the latest sign of US pressure, four US senators on Thursday introduced a bill that would block delivery of F-35 jets to Turkey until Ankara gives up the Russian missiles.

"Turkey is an important NATO ally and willing partner in addressing a number of US national security priorities," said Republican Senator James Lankford in a statement on the bill.

"It's concerning that Turkey would seek close defence cooperation with Russia, whose authoritarian ruler seeks to undermine NATO and US interests at every turn."

Turkey plans to buy 100 F-35s and some Turkish pilots already started training with counterparts in the US.

US officials say they are worried about technology from the S-400s allowing Moscow to collect data on NATO aircraft and about how compatible the Russia systems will be inside NATO operations.

US officials have increasingly warned about fallout over the missile deal for the F-35 jet programme and have pressured Turkey to buy US-made Patriot missile defences as an alternative.