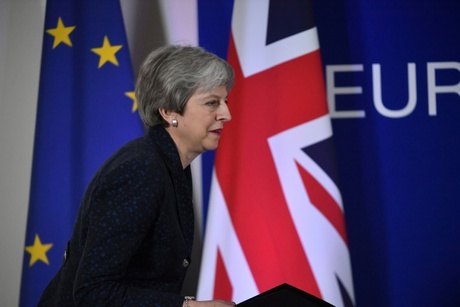 British MPs will try again to chart a new Brexit course on Monday after rejecting Prime Minister Theresa May's deal for a third time, but the EU warned its patience was wearing thin.

Less than two weeks before Britain risks crashing out of the European Union, MPs will hold a second round of votes on various options to try to break the political deadlock.

But any attempt to move towards closer ties with the EU risks splitting the government, and she might try one last time to get her deal in the coming days.

EU leaders have called an emergency summit on April 10 and warned that unless Britain sets out a plan, it risks cutting ties with its largest trading partner two days later with no deal at all.

"With our British friends we have had a lot of patience, but even patience is running out," European Commission President Jean-Claude Juncker told Italian public TV channel Rai 1 on Sunday.

The political chaos forced May to postpone Britain's original exit day from March 29, but she said it would be "unacceptable" for a further delay beyond European Parliament elections on May 23-26.

Frustrated with her approach, MPs in the House of Commons last week voted to give themselves powers to find an alternative strategy, by holding a series of "indicative votes."

No single option won a majority in the first round but MPs will try again on Monday, with voting starting at 8.00 pm (1900 GMT), and another day of debate is scheduled for this Wednesday.

The two most popular options last week were a new EU-UK customs union or a public vote on any agreed deal, both backed by the opposition Labor party.

Some pro-European ministers might support a customs union, but that risks mass rebellion among the rest of May's cabinet, who believe it would curtail Britain's freedom after Brexit.

Another widely discussed plan, based on the model of Norway's membership of the EU's single market, secured less support last week but many MPs abstained.

In rare public remarks, chief whip Julian Smith -- who enforces discipline among May's Conservative MPs -- said a closer relationship with the EU was "inevitable" due to the make-up of parliament.

But in a BBC interview broadcast Monday, he also noted the divisions among ministers, saying it was "the worst example of ill-discipline in cabinet in British political history."

German junior foreign minister Michael Roth had harsher words when he addressed a meeting of his Social Democratic Party in Berlin this weekend.

"Brexit is a shitshow, I'll say it quite undiplomatically," he said.

He blamed people who "went to private schools and elite universities", saying: "They screwed it up and others have to take responsibility for it."

May struck a divorce deal with the EU last November, but it was rejected by MPs in January, on March 12 and again last Friday.

The numbers of Conservative MPs against the plan fell after May pledged to resign if it passed, but her Northern Irish allies, the Democratic Unionist Party (DUP), are still opposed.

Guy Verhofstadt, the leader of the European Parliament's Brexit committee, urged MPs to "find a compromise and stop this chaos".

"This evening, for once voting 'Yes', instead of every time voting 'No'," he tweeted.

Cabinet ministers will meet on Tuesday morning to discuss the outcome of the ballots, and could still decide to hold a fourth vote on May's deal on Wednesday or Thursday.

The votes by MPs are not legally binding but the government fears they may lead to legislation that would force May's hand.

"I fear we are reaching the limits of this process in this House," the prime minister said last week, fuelling speculation that the only way out may be a general election.

But many Conservative MPs oppose the idea. The party's deputy chairman James Cleverly told Sky News: "I don't think an election would solve anything."