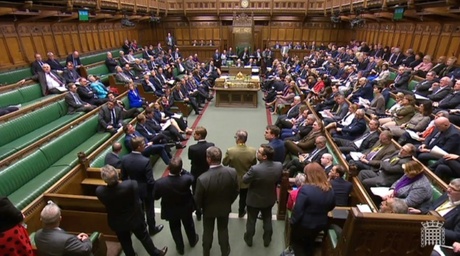 British Prime Minister Theresa May chairs a crucial meeting of senior ministers on Tuesday to seek a way out of a months-long Brexit deadlock, as the EU warned a no-deal departure from the bloc is growing more likely by the day.

The cabinet will discuss the next steps after lawmakers failed Monday to find a majority on any alternative to her divorce deal -- an agreement they have also rejected three times already.

Brussels has set Britain an April 12 deadline to pass the agreement, settle on an alternative or crash out of the European Union.

Backbenchers in parliament's lower House of Commons seized the initiative by holding a round of votes last week on eight alternative Brexit options, but failed to agree on any of them.

It refined them down into four choices this week, but once again a majority voted no to them all.

The results were closest for proposals to negotiate a permanent customs union with the EU, but that still fell short by three votes.

"If the UK still wants to leave the EU in an orderly manner, this agreement, this treaty is and will be the only one," he told a think tank in Brussels of May's deal.

The EU has called an emergency summit for April 10 to agree on the next steps.

Brexit Secretary Steve Barclay hinted the government could now bring May's deal back for a fourth vote this week and avoid a longer delay to Brexit that would mean holding elections to the European Parliament next month.

"To secure any further extension, the government will have to put forward a credible proposition to the EU," he said.

"The only option is to find a way through which allows the UK to leave with a deal.

"The best course of action is to do so as soon as possible."

The political chaos forced May to postpone Britain's exit from the original date of March 29.

Monday's voting saw proposals rejected for remaining in the EU's customs union and its single market.

A vote on plans for a second referendum and to block a no-deal Brexit also fell short.

Nick Boles, the MP who had proposed a plan to stay in both the single market and a customs union, quit May's Conservative Party after the vote.

"I have given everything to an attempt to find a compromise," an emotional Boles told parliament.

"I have failed chiefly because my party refuses to compromise. I regret therefore to announce I can no longer sit for this party," he said.

The Conservatives rely on backing from Northern Ireland's Democratic Unionists for a narrow majority, which shrank even further with Boles' departure.

"The cabinet can say... to parliament, 'look, we gave you two chances to come up with something, you've failed both times. Vote for (May's) deal otherwise next week there is a real danger of no-deal'."

The Daily Mirror called it "another night of division and despair".